British newspaper The Guardian has published a list of 40 of the best beaches in Europe – five of which are in Portugal and two in the Algarve.

Cacela Velha in Vila Real de Santo António and Caneiros in Ferragudo (Lagoa) were the two Algarve beaches featured on the list, which comprises of beaches picked by the publication’s travel writers.

“In the unspoiled eastern Algarve, where olive trees outnumber people, Cacela Velha is one of Portugal’s most beautiful and unvisited beaches (with no bar). It is framed by traditional whitewashed fishermen’s houses, complete with blue trim to ward off the devil, and an ancient fort that dates from the Moorish occupation,” said the paper.

“This is the most easterly beach of the Ria Formosa natural park, and its golden sands stretch for well over a mile, and shift according to the winds and tides. The water is warm and diaphanous, with low tide revealing pools and lagoons brimming with sea life.”

Meanwhile, Caneiros was described as a “quiet beach”, “favourite of the cognoscenti.”

“It boasts a seriously good beach bar, Rei das Praias (the scarlet prawns, carabineiros, are excellent) perched on stilts and looking on to the ‘Leixão da Gaivota’, or Seagull’s Rock. The beach is backed by the honey-coloured limestone cliffs that run along the whole Algarve coast; one side is given over to sunbeds. Parking spaces are very limited, so it’s wise to get there early,” the paper says.

Also featured on the list are Santa Cruz’s Praia da Física on the Silver Coast, Praia da Zambujeira do Mar along the Costa Vicentina in the Alentejo, and Praia das Bicas in Sesimbra near Lisbon. 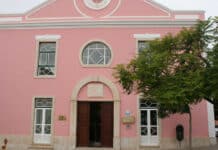