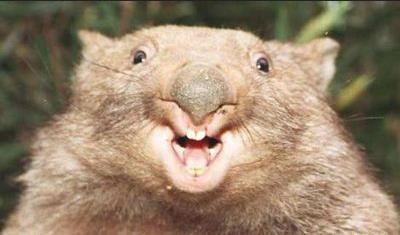 An Australian eco-entrepreneur and self-confessed poo expert is planning to make a range of luxury stationery from wombat dung.

Darren Simpson has big plans for the square-shaped fecal deposits of a wombat named Nugget, whose waste is supposed to act as a territorial marker.

“It’s not round or long – it’s actually little bricks and it’s very, very fibrous,” he said.: “When you break it open, basically what you can see through it is plant matter. So they’re a good little pulper.”

The wombat poo paper, which is made by combining the sterilised wombat waste with cotton fibres, was launched in Tasmania State this year and follows the success of Simpson’s “roo poo” paper, made from kangaroo faeces.

“People come into the business and can do a tour, and we use lots of recycled materials; cotton rag offcuts, cotton thread that we get from a towel factory, denim from jeans, apples,” he said.

He added that adhesive tape had solved the one concern customers had when using his earthy stationery.

“The only problem we ever had was that no one ever wanted to lick the envelope,” he said.