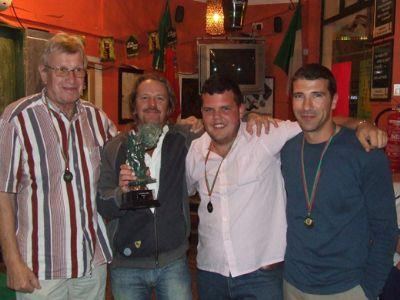 Over six months, across two leagues, with singles, doubles, triples and cup competitions along the way, the Carvoeiro darts league finally came to a close at the end of March.

More than 50 people living in, around and visiting Carvoeiro this winter took part in the annual competition, now in its seventh year, bringing together the British, Portuguese, Dutch, Irish, Canadians and Brazilians in the village in the spirit of community and sporting prowess.

The presentation of the final was undertaken by league co-founder Evert Van Zanten, with Luís Piscarreta playing Debbie McGee and handing out some stunning trophies to all assembled at the Irish Times bar in Carvoeiro on March 27, with food and hospitality provided by Graham Groom.

Brothers Bradley and Ryan O’Connor, who play for Mungos 1 and Anteak Bar respectively, picked up a clutch of prizes showing that the youth in the village are becoming the dominant force in the local league, and new additions to the Acordeão Bar team backed up the latest wave of fresh young players to the leagues.

Bradley came second in the number of 100s gained with 52 across the season while his older brother Ryan took the first place with 64 100s. Ryan also came first in the doubles competition paired with team mate Richard Lamb beating off stiff competition from previous champion Evert van Zanten and Luís Piscarreta.

Members of the Anteak Bar team showed their strength in the village in the triples competition, with their team taking first place in the triples and also picking up the first ever Carvoeiro Cup accolade, a knock out competition brought in this year.

Darts in the village will now take a back seat until October or November when the 2009/10 season resumes once again across the bars in Carvoeiro.