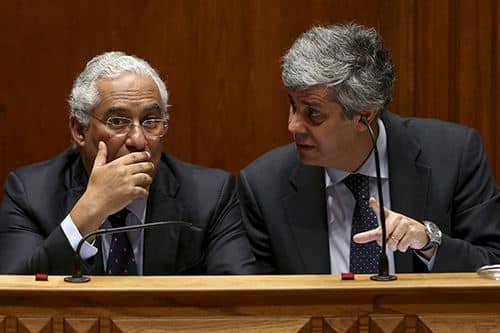 Round one to Portugal! After choreographed weeks of institutional rumblings suggesting Portugal’s bid to turn the page on austerity was doomed, António Costa’s new government has shown it won’t cave easily to bullying. Throughout the soundbytes – and the relentless campaign by national media predicting more austerity on the way – Costa remained sanguine. None of Brussels’ complaints and ‘requests for more measures’ were “politically relevant” was his mantra. And news on Wednesday showed he knows how to play the troika at its own game, and keep radical left-wing partners on-side at the same time.

Brussels has given way over Portugal’s deficit, over growth targets and, in the words of Expresso: “despite the fact that it hasn’t covered any of the demands made by Brussels, the efforts of the Portuguese government have satisfied the troika”.

It is the kind of Alice in Wonderland sentence that hints at the real chaos ongoing in Europe.

Perhaps the bottom line of the fire and brimstone that has been rattling the nation’s pages for the last 10 days is that Portugal’s debt to troika lenders will remain unsustainable no matter what kind of state budget the country comes up with.

Add to this the reality that despite four years of austerity public debt continues to increase – it now stands at a massive 231.1 billion euros – and one can start to understand why the troika arrived with a list of 18 ‘demands’ and left with none of them effectively accomplished.

In his weekly slot on SIC TV on Monday, Miguel Sousa Tavares stressed Portugal is a “minute problem in financial terms for Europe”. This has been Costa’s trump card.

Europe’s much larger problems – negotiations with the UK over its promised ‘in-out’ referendum, a face-off on three key fronts with Italy, and the spiralling refugee crisis – are compounded by the fact that Austria and Lithuania are also showing “risks of non-compliance” with the EU’s so-called PEC (Pact of Stability and Growth) and Spain doesn’t even have a government!

It is simply not the moment to censure a country that is broke whichever way you look at it.

Though how the only ratings agency that hasn’t pegged Portugal’s debt at “rubbish” reacts remains to be seen.

DBRS joined the three other “big boys on the block”, Moody’s, Fitch and Standard & Poor’s, this week to warn that Portugal’s financial plans were optimistic to say the least.

Again, the Chinese Whisper media machine cranked up the warnings that if DBRS dropped Portugal’s rating, the country would be in the soup “incapable of raising money” through international markets – but for now Costa’s stand-off has bought time, and the various political parties involved in his left-wing alliance are all quoted to be happy with Portugal’s State Budget for 2016.

Europe’s commissioner for financial affairs, Pierre Moscovici has even managed to save face by saying that Portugal has agreed to “additional austerity measures”, but these are largely ‘cosmetic’ and, according to TSF radio, have “penalised only the country’s lucrative sectors”, leaving people’s earnings intact.

Moscovici’s additional austerity ‘coups’ have come in the guise of taxes on cars and fuels and banking taxes, writes Expresso – not going on to explain much more.

Jornal de Notícas suggests there could also be an increase in stamp duty “on certain transactions”.

All the threats over public sector workers’ salaries being ‘replaced’ have fallen on stony ground and thus the staggered percentage increases planned for this year will be going ahead.

As BE (left bloc) parliamentary leader Pedro Filipe Soares said following a meeting on Tuesday evening with finance minister Mário Centeno, “austerity is part of the past”.

Whichever way Brussels likes to package it, round one has definitely gone to Portugal.

Brussels’ protectionism a “mixture of technocracy and failed ideological fundamentalism”

And just to really put the boot in, the Mayor of Lisbon Fernando Medina has gone into print to explain that Brussels’ “protectionism” over tenths of percentage points has been an irrelevance from the start.

“The explanation for Brussels’ stubbornness is a mixture of technocracy with failed ideological fundamentalism”, he wrote in Correio da Manhã on Wednesday. It is also a ruse to (try and) “prevent other countries from pursuing alternative politics”.

“Unfortunately, these exercises in negotiational tension cause unnecessary damages on international markets for a country like Portugal where public debt – despite all the austerity and all the promises of Pedro Passos Coelho – has never left the rubbish category of three major ratings agencies”.

Medina concludes: “It is time that technocracy gave way to politics and ideology to realism – for the good of Europe, and the European project.”