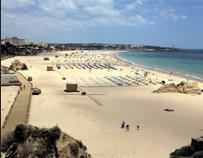 THREE ESTABLISHMENTS in the busy bar area of Praia da Rocha were burgled in the space of five and a half hours on Monday morning.

A bowling alley, a bar and a restaurant on Avenida Tomás Cabreira were robbed between 3am and 8.30am.

According to national daily newspaper Correio da Manhã, in each robbery, the doors were forced open but the thieves did not manage to steal items of substantial value. In the bar, they were caught on CCTV footage.

In Bowling Praia da Rocha, there was no alarm or CCTV systems and the thieves entered at around 3am moments after staff left, stealing around 300 euros from the coin boxes in four game machines.

At around 4.30am, Cheers bar was robbed. The intruders took a safe containing around 100 euros in coins and cut the wires for one of the CCTV cameras, while not noticing another that continued to record.

The restaurant Hollywood was broken into at around 8.30am and around 250 euros was taken from the cash register. A cleaner saw one man leave the restaurant and called the police.

The three incidents are being dealt with by the Portimão PSP criminal investigation task force.

The owners of the establishments have said that they are keen to see the new CCTV systems installed in the streets of Praia da Rocha and hope that this initiative will reduce burglaries and protect the residents.

In an effort to improve security for tourists, Praia da Rocha in Portimão will install two dozen CCTV cameras before the summer. The cameras will be on and around Avenida Tomás Cabreira, where there are many bars and in the summer, it becomes inundated with tourists.

The request for the CCTV system was made in June, 2006, and after alterations to the project, it was finally approved last month.

The cameras will be supervised by the PSP police force and will be in operation this summer (See The Resident’s February 1 edition).