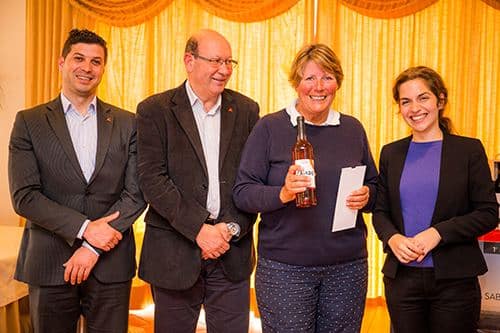 Mike Johnson, the popular character and English voice on Solar FM, passed away in the St. James Care Home in Plymouth on Monday, May 2. He finally lost his long battle with cancer.

Mike came to the Algarve in the late 60s where he teamed up with his former BBC colleague Peter Haigh, the well-known continuity announcer and presenter of Come Dancing and Picture Parade.

Peter was married to the 1950s film star, Jill Adams. They ran a popular bar/restaurant in Albufeira. The three grew so close that eventually Jill left Peter to be with Mike and they continued in the restaurant business. That relationship also failed.

Mike continued with his love of music and played regularly in various venues across the Algarve. He was an expert on musicals and classical music but was an equally accomplished jazz pianist.

In 1986, he met up with Paul Buick, owner of the then Solar Radio 94 FM where he made his popular PLAY BACK Sunday show and presented daily local, national and international news in English.

His time with Solar FM came to a sudden end in 1994 when he suffered a heart attack while at the controls and about to start his radio show.

From then, sadly, Mike’s health deteriorated, which forced him to return to the UK for medical treatment. Then cancer set in. In spite of this, he still continued playing piano in a Plymouth hotel and regularly wrote topical, amusing and interesting articles for the Algarve Resident.

A larger than life character with a distinctive BBC voice, he will be remembered forever by those of us who had the pleasure of knowing and listening to him for so many years.

What we remember most about Mike is that all the restaurants and bars he was associated with were well known for their good food and atmosphere.

The Curry House was the first place to serve authentic curries in Albufeira, before any of the Indian restaurants started up. He played the piano as well so it made for a really good evening.

The first place we knew him was from the GB Bar, where he presided over the bar. He was very relaxed and always smoking a cigar, and the food prepared by Jill Adams was excellent.

She made a fantastic curry as well and the bar was always packed with expats and local Portuguese, who enjoyed the atmosphere of an English Pub with a mixture of  locals and holidaymakers of all nationalities and often show business personalities, who made it a special place for us all.

Mike and Jill took the same feeling to the Quinta da Saudade restaurant, which became a meeting place for the Quinta residents and the rest of us who enjoyed an interesting menu and the added bonus of being able to listen to Mike play the piano.

I remember when Mike had The Bull and also when he was at the Balaia Village Restaurant. We knew that wherever he went next we would get the same welcome and hear some more of his stories. People were drawn to him and I am pleased that he visited occasionally after returning to the UK to look everyone up.

He definitely left his mark on Albufeira – many of the local Portuguese worked for him and have often asked after him over the years.

We shall miss him dearly.