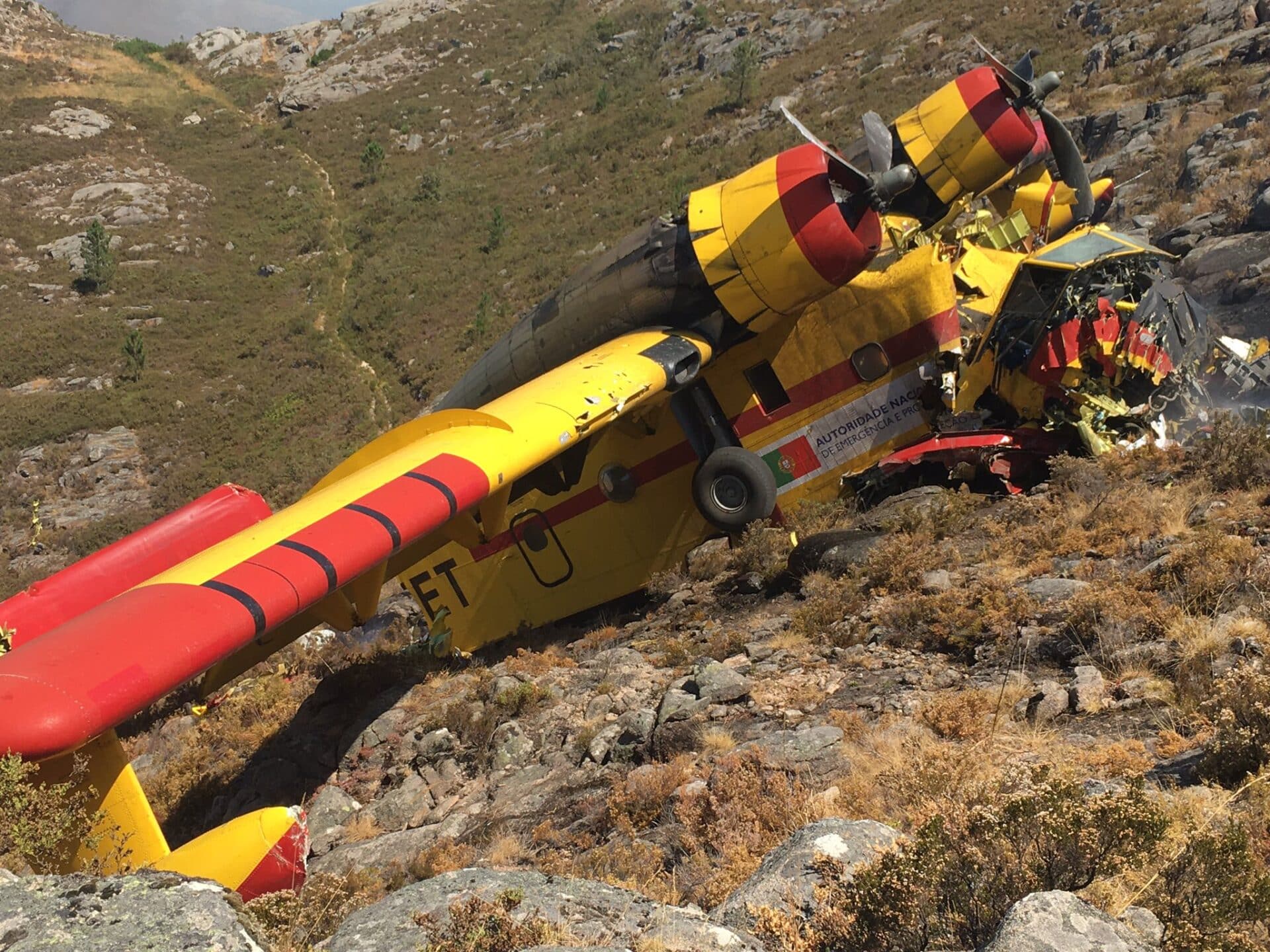 The tragedy happened mid-morning as the plane was taking part in aerial attacks on a fire in the Peneda-Gerês national park at Lindoso, Ponte da Barca.

Eleven aircraft are still tackling the blaze which is right on the border with Spain.

Explain reports this afternoon, the downed plane had just finished a ‘scooping’ (collection of roughly 5000 litres of water) and was preparing to drop the load in an arc at the head of the fire.

This kind of manoeuvre is much more difficult in mountainous regions, which this particular zone is.

By the time rescue workers got to the wreckage, both victims were in cardio-respiratory arrest.

SAV (advanced life-support) technicians managed to ‘bring back’ the Spanish co-pilot, but were unable to resuscitate the 65-year-old pilot, named in a ‘note of regret’ issued by the Ministry for Interior Administration as Jorge Jardim (see below).

Expresso has subsequently run a story suggesting ‘experts’ say the Canadair was simply the wrong type of plane to be used in this incident.

But a previous report cited the commander in charge of operations Pedro Araújo saying the heavy aircraft “had all the conditions to operate” in the circumstances.

GPIAAF (accident) investigators have assessed the scene – despite the fact it is still part of an ongoing occurrence – and concluded that the inquiry has to be run by Spanish counterparts, as the plane came down on the Spanish side of the border.

For now, no villages in either territory are under any immediate threat.

Expresso recalls that this is the 5th fatal accident involving firefighters in the combat of wildfires this year. The accidents have all so far happened on a Saturday.

Eduardo Cabrita, minister for Interior Administration, has issued a note of regret this afternoon, presenting is “heartfelt condolences” to the family, friends and colleagues of pilot Jorge Jardim who made up part of the special aerial fire combat force run by the Portuguese branch of the international company Babcock.

Mr Cabrita also wished for the full recovery of the co-pilot, saying “in this tragic moment I would like to send a word of solidarity to all those who give such selfless service to the country in the combat of fires”.

He also thanked Spanish authorities for their help in the difficult recovery operation.