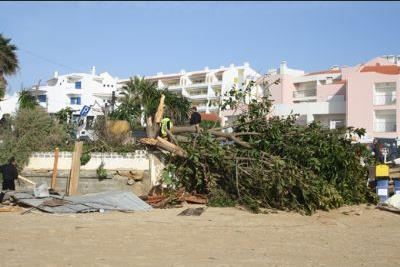 A tornado caused a wave of destruction to businesses and the surrounding landscape along the coast of Portimão on Tuesday night.

Damage was caused along a stretch of coastline between Três Irmãos beach in Alvor and Praia da Rocha.

According to the regional emergency rescue operations authority (CDOS), the destruction was caused by a “mini tornado”, which also damaged trees and electrical infrastructures.

Praia do Vau was the area worst hit by the freak weather occurrence, where the winds ripped roofs and broke glass windows in restaurants and cafés along that section of the coastline just before 11pm.

Despite the damages to property and surrounding landscape, which was being cleared up by machinery from Portimão Câmara on Wednesday morning, no casualties were registered.

According to the national meteorological institute, the Algarve was under yellow alert on Wednesday, with strong winds predicted with gusts up to 70km per hour and waves up to five metres in height.

For a full weather report for the region this weekend, please visit the top stories on the Algarve Resident website today (Friday) at www.algarveresident.com