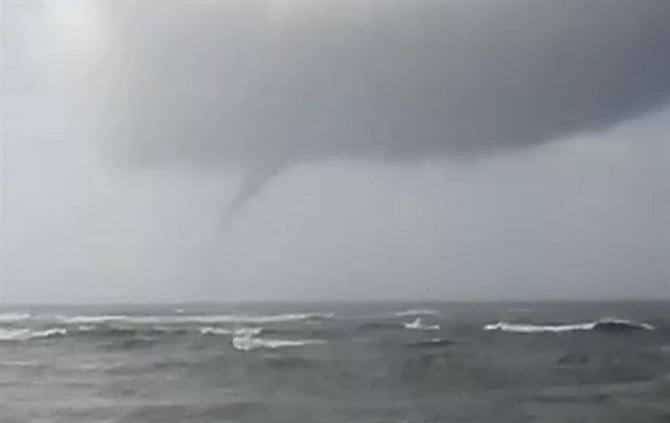 Yet another tornado hit the mainland yesterday as tropical storm “Gisele” made landfall.

The whirling wind hit the village of Belinho, in Esposende, mid-morning, damaging homes, causing injuries to two people, bringing down an electrical post and battering cars.

Elsewhere, three staff members at publishers Porto Editora in Maia were hurt when the roof of the company’s office building caved in.

Gisele so far has caused schools to be temporarily closed down in the north, trains to come to halt – due to debris on the line – and even old buildings to collapse.

But the incident at Porto Editora was perhaps one of the most dramatic consequences of the bad weather. If it hadn’t been for a “very large printing press”, there would almost certainly have been a lot more injuries, reports Correio da Manhã. The press kept the collapsed roof from falling any further into the building, allowing terrified workers to escape

By the end of the day, over 720 ‘emergency call-outs’ had been logged by first-responders, with flood damage being mopped up on all sides.

The litres of rain falling in an hour were logged in a number of places: Luzim (in Penafiel) leading the table with 13.3 litres/ hour, between 11am and midday, followed by Coimbra with 12.9 l/h from midday to 1pm – while snow is falling on high-ground in the north and leading to various road closures.

Positive notes of the day saw Loulé courthouse finally reopen after a two-week lay-off due to flood damage, and the towing operation fraught with complications in the Tejo succeed in moving the Spanish cargo boat from the sandbank it has been stuck on for over a week – though it remains ‘stuck’. There will be new attempts to escape the bank at high-tide today.

Meantime, bad weather associated with Gisele will “continue for the next few days”, say meteorologists, but the worst does appear to have passed.

Rain, “sometimes strong”, will continue to fall for the next few days – with the possibility of hail and thunderstorms in the north and centre – but conditions generally will be “less severe than they were on Wednesday”.