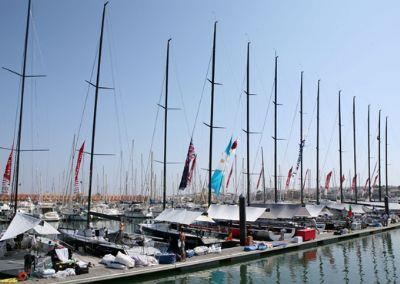 The fourth and concluding Atlantic stage of the prestigous Audi MedCup TP52 Series came under sail in Portimão for the third consecutive year on Tuesday.

The home team of Olympic sailors Pedro Mendonça, Afonso Domingos, Hugo Rocha and Nuno Barreto aboard Bigamist 7 are attempting to add to their five regatta wins to date which sees their boat lying in fifth overall, but will have their work cut out to overhaul current leaders and title favourites Emirates Team.

The New Zealand representatives, crewed by vastly experienced Americas Cup veterans, have already demonstrated their superiority in Marseille and Sardinia and are more likely than not to be crowned overall 2009 champions in the Algarve.

The sailing highlight of the year also features the Portuguese debut of the GP42 Series and is acompanied by an Audi MedCup Expo featuring live picture transmission of the races, commentary and virtual images pertinent to the event.