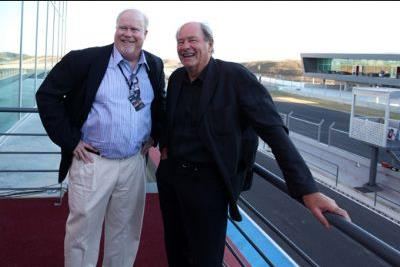 Influential figures from the world of cinema recently visited the Algarve to see plans for the future film studios due to be built close to the race track.

The Algarve Film Commission has been working closely with film makers and the Portimão Câmara to promote the region as THE location for filming.

The studios, Holding Picture Portugal, will be the newest addition to international cinema, commercials, video games, music videos and audiovisual production centres and will have state-of-the-art equipment operated by accomplished and experienced technicians.

The complex will also include a theme park and a special feature from the world of the automobile.

The film makers that were in the Algarve included James Bond executive producer Anthony Waye, the artistic director of the Pirates of the Caribbean Richard McGuire and Sanford Hampton, who is responsible for the popular US TV series Jag, as well as Matt Cimber, writer, director and producer, who said, “Portugal has the topography of 40 US states so it has a natural capacity for shooting. Practically, it would do nothing but benefit Portugal. Producers will definitely come here to make their films.”

“International film is constantly changing and I believe that Portugal is one of the best locations in the world for filming,” said Sanford Hampton, who has worked in the industry for more than 35 years, with over 100 movies under his belt.

“This is going to be really great for Portugal and I am very excited about it. We’ll make lots of movies here,  he said.

“There is potential here and you can now shoot almost anywhere here. I wish you every success,” said Anthony Waye.

Manuel da Luz, Portimão Câmara President, said: “We are taking another step with the Portimão studios and these people here with me now are the best guarantee of the decisions we must take to have cinema in Portimão.”