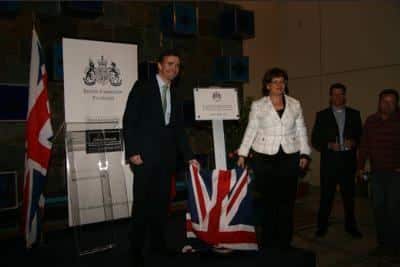 ‘À velha aliança’ (to the old alliance) was the toast by the British Ambassador to Portugal and the Faro Civil Governor as they looked forward to a continuous strong relationship between the UK and Portugal at the official inauguration of the new consular premises in Portimão.

The party, held in the courtyard of the consulate on Thursday, March 19, saw many dignitaries from the Algarve and across Portugal gather for a chance to meet Alex Ellis, British Ambassador to Portugal, his new Consul to the Algarve, Paul Rodwell, the Director of Consular Services of Iberia, Michael John Holloway, and Faro Civil Governor, Isilda Gomes.

After the unveiling of a commemorative plaque, the Ambassador addressed the audience and spoke about the importance of nurturing the relationship the UK has with Portugal.

This was also evident in Isilda Gomes’s speech, who said: “I would like British people living in the Algarve to feel as if they were Portuguese. We are glad to have you here and would always welcome more British to the Algarve.”

She joked about the British having discovered the Algarve before many Portuguese from the north of Portugal and added that “the British had made the region richer and continued to bring good things to the Algarve”.

Regarding the British government’s official representatives in Portugal, the Civil Governor said she was delighted to work with people who would make any problem easy to solve.

“I am sure we will continue to work very closely,” she said.

Paul Rodwell said that with the support of the Portuguese government, the consulate could react a lot quicker to problems.

Among the guests were leading members of the Portuguese local authorities in the Algarve, such as security forces, civil protection and immigration officials.

At a press conference after the ceremony, the Ambassador told the Algarve Resident that the British Embassy was keen to support British companies wishing to invest in Portugal and had already met with a few but he added that he was not aware of any new companies wanting to invest in the Algarve.

“We also assist Portuguese companies who want to invest in the UK,” he said.

Michael John Holloway held a separate session with the local English-language press providing those who visited Madrid’s Consulate General last year (see Algarve Resident, September 19) with a chance to catch up on developments in the centralised Iberian Consular Services.

“The new Algarve consulate is a firm statement of what we are all about. A more modernised, front-facing operation, able to provide better customer service,” he said.

The Director of Consular Services Iberia told the Algarve Resident that he sees Iberia as a whole, whereby there is a continuous flow of services.

He was delighted that partnerships between the consular operation and several groups were evolving and gave the example of the Department for Work and Pensions (DWP), which was hoping to work closely with Age Concern and the Royal British Legion to provide more rounded support of citizens retiring to Iberia.

“I know there is a demand,” he said and added that a representative from the DWP was recently in Portugal to discuss co-operations and a possible base here.

Consular roadshows are also in the plans for later in the year and “a venue such as BLiP would be ideal to hold them” but nothing has yet been confirmed.

Michael John Holloway said this initiative would offer British citizens the opportunity to have one to one consultations.

The combination of a global financial crisis with the collapse of sterling as meant that people living off pensions in Iberia have started feeling the pinch.

“There is no doubt about this,” he told the Algarve Resident. “We are closely monitoring the situation, but seriously believe citizens living in the Costas in Spain are being more affected than those in the Algarve. The consulate can help by signposting them in the right direction and putting them in touch with the people that can help them, such as the DWP.”

Discussions are currently being held for the appointment of an honorary consul for the eastern Algarve by the end of the year.

Although the Ambassador did not wish to confirm this at this time, Michael John Holloway went a little further and said that they were hoping to open a smaller office in Faro where an honorary consul, “ideally a local businessperson”, could be based and assist British citizens in that part of the Algarve as well as from across the border.

“We want to extend our services so they are more accessible to more people,” he said. “However, the set up in Faro would be limited in the services it would provide and difficult situations such as assault or rape would still be dealt with by the Portimão operation, where the staff are specifically trained to handle sensitive cases.”

When asked if this was a reflection of the times, Michael John Holloway said: “No, I don’t think so. We’ve always had to deal with cases of crime committed against British citizens, but never had the facilities. Now we do. Our citizens deserve this.”

If you would like to read more about what the British Embassy and Consulates can do for you, please visit http://ukinportugal.fco.gov.uk/en