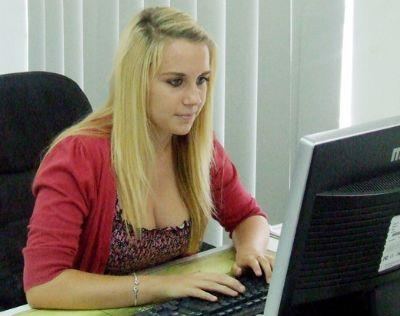 A student at the International School of the Algarve in Porches, Claudia was keen to work at the Algarve Resident office in order to learn the ins and outs of producing a weekly newspaper and hopefully one day become a journalist.

In her letter of application to Algarve Resident Editor Inês Lopes, she said: “I think that working in a newspaper is very important as the community relies on them for information. The media is a powerful way of voicing opinions and raising awareness in different topics.”

She fulfilled several assigned tasks during the week she was with us and her support of the editorial team was invaluable.

This is what she had to say of her time at the Algarve Resident:

“As part of school and education, it’s encouraged for teenagers to go on ‘work experience’- taking a role in a workplace for a week or two. For mine, I came to the Algarve Resident for a week. I saw what effort goes into a newspaper and how to get it out on time.

“I was welcomed with warm friendly faces and was given work to do straight away. They kept me busy, but not so I was weighed down! The week I was there, I wrote two weeks’ ‘It’s a funny old world’, I edited two weeks’ Pharmacy times, I wrote briefs on news, the Film page, Music news (including Michael Jackson’s death), a travel feature and a fashion feature.

“Working at the Algarve Resident was better than what I had expected it to be, I certainly enjoyed myself.  I hadn’t ever really thought that working for a newspaper would be something I could actually do, but my week here has changed that. The Algarve Resident has made me think how I’d like to carry on with Journalism, and think about becoming a feature writer.

Everyone in the office was helpful and kind, a really great work place! I always felt like part of the consistent team.”