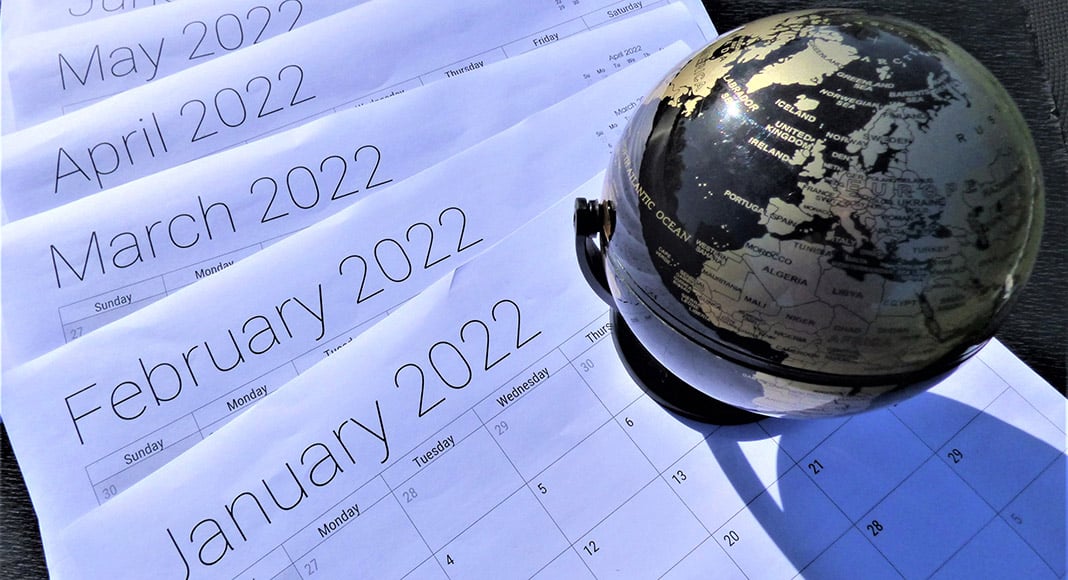 A new year arrived and, as we sat quietly at home, the usual phone messages and calls took place to wish family and friends a happy 2022. As we did this, my daughter casually asked me how I felt about my son being left behind in the past while we moved into 2022. This concept completely threw me, but she was right. My son was in Brazil for New Year’s Eve and so he remained in 2021 for an extra three hours.

I have never really paid much attention to time zones other than hearing about jet lag or knowing to check the time abroad before making a work-related phone call, but the idea that parts of the world moved to a new year whilst others stayed behind suddenly intrigued me.

Time zones were first introduced in the 19th century to synchronise time across the world. Until then, town clocks were set daily at noon based upon when the sun reached its highest point.

It was the advent of railroads, which allowed people to quickly travel long distances, that made timekeeping confusing as each area had a different local time.

Britain’s Great Western Railway began standardising time by 1840 and, by 1847, the post office was transmitting, by telegraph, time signals from Greenwich to most parts of the country to set the clocks. In the US, four standard time zones were introduced in 1883 for trains to run efficiently.

In 1878, Canadian Sir Sandford Fleming suggested the system of worldwide time zones calculated that, as the earth rotates once every 24 hours and there are 360 degrees of longitude, each hour rotation is 1/24th of a circle, so the world was divided into 24 time zones.

Seven years later, the International Prime Meridian conference was held in Washington and Greenwich Mean Time (GMT) was selected as the world’s time standard with the international 24-hour time zone system referring back to the GMT, thus allowing world interaction and communications to become more efficient.

Never has mankind been so governed by the measurement of time as in today’s technological world. Early civilizations measured the passing of time using phases of the sun, moon and position of the stars and it was the Egyptians, in 3500 BCE, who used obelisks as sundials to divide a day in two.

Later, sundials were used to further divide the day and star locations marked the night-time hours. The moon’s shape and orbit around the earth evolved into measuring a month and the changing seasons became a year.

The Greek stone vessel water clocks with a small hole that allowed water to drip at a constant rate, the Chinese candle clocks and hourglasses were subsequent methods used to quantify the passing of time.

However, it was the Babylonians who divided daylight time and dark time into 12 parts to make up 24 hours and subsequently divided these into 60 minutes and minutes into 60 seconds.

Eventually, in the 16th century, Galileo Galilei’s work with pendulums led to the first pendulum clock being made in 1656 by Dutchman Christiaan Huygens and pendulum clocks remained the most accurate time measurement into the 20th century.

My grandparents loved old clocks and I remember my grandfather winding up and setting the pendulums moving on his wall clocks every night before going to bed.

However, the regular tick tock was very loud and the half-hour and hour chimes were annoying in the middle of the night!

Before trains and telegraphs were invented, there was little need for the accurate measurement of an hour yet alone of minutes or seconds, so originally clocks only showed the hour. It was in the late 1700s that the minutes’ hand was added to clock faces. Afterall, people did not really have the need to measure such a small amount of time whereas now we measure milliseconds!

The pendulum clocks were superseded by quartz crystal clocks invented in the 1930s which, in turn, have been supplanted by the atomic clocks that measure the frequency of electromagnetic radiation emitted by an atom or molecule and are so accurate that they can run for millions of years before losing a second.

So, as the fireworks lit the sky and scared our dogs, not only was my son in a different year, but he was still in December while we were in January.

Did you know that the calendar goes back to Roman times? Back then, the new year was celebrated in March which was when the Romans would honour Mars the god of war and prepare for new military campaigns.

The Roman calendar initially only had 10 months until Julius Caesar, in his 1st century BC reforms, added January and February.

January was named after Janus, the god of transitions and gateways, who is depicted with two faces, one looking forward and one looking back. This is so apt as New Year’s Eve is a time to reflect on the past year and look forward to better things to come.

As I have become older, it is true to say that time does seem to have speeded up. The last two years especially have flown past and made one thing clear to me. In 2022, I must make more time. More time for myself, my family and friends. I want to take the time to appreciate even more what I have because the pandemic has taught me to be grateful.

My children started new jobs they enjoy and even though I worry every time they are travelling to or from work, especially my son as he travels all over the world, again I am so grateful that they have been safe and healthy.

In 2022, I want to make more time to enjoy the simple pleasures of this uncertain world, even if it is just to have a cup of tea in the garden, listening to the birds with the sun on my face and letting time pass.