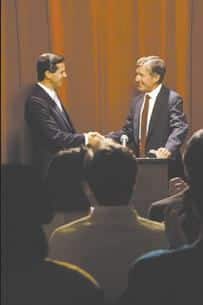 POLITICIANS ARE out of favour right across Europe at present, especially Parliamentarians. There is a feeling they are out of touch and out of tune, and only interested in themselves. It is easy to see why.

Parliament is, by definition, a place where politicians ‘parley’, where they speak to each other. There is no requirement to listen to each other, or indeed to anybody else.

It would be so much better if there was a ‘Listenament’ instead, where politicians actually listened to the real world outside – an especially important concept given the recent referendum result in Ireland on the proposed Lisbon Treaty.

Virtually all the political elite supported the Treaty. So did trade unions and business organisations. The might of the media was marshalled in favour of a ‘Yes’ vote, and yet the electors turned out in strength to say ‘No’. They were fed up with being told by the politicians how to vote, and used their democratic right to say that it was for the people to tell the politicians and not the other way round.

This is not the place to probe the rights and wrongs of the Treaty. The point is that to become law it needs to be ratified by all 27 EU Member States. If one single country rejects it, the Treaty should fall. If the politicians were listening.

But the reaction across Europe, in Westminster and Brussels, was identical. The people had got it wrong. Ratification would carry on regardless. Gordon Brown insisted on completing the process on behalf of the UK. EU political leaders agreed to do the same, with the possible exception of the Poles and the Czechs who are still thinking about it. The European Council summit held the week after the referendum, at which all Heads of Government were present, blithely declared that the process had to go on because the Treaty was designed ‘to help Europe work more democratically’. Who says?

Each of the Heads of Government attending that Council session, just like MEPs, were elected by the people, to be accountable to the people. It would appear that those attending the Council somehow believed they were elected by each other, and accountable to nobody. How can the EU work more democratically when people in most countries are not allowed a vote, and those who do vote are ignored?

I want the EU to succeed and prosper, not to fail. But that means politicians have to connect with the people who elected them. That means the ratification should stop, and the Treaty should be buried.