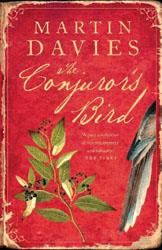 The Conjuror’s Bird is a dazzling debut, spanning three centuries of secrets and surprises. It seems a long time ago since Fitz and Gabby were together, with his work on extinct species about to make him world-famous. Now, it is his career that is almost extinct.

Suddenly, the beautiful Gabby reappears in his life, wanting his help in tracing the history of The Mysterious Bird of Ulieta, a creature once owned by the great 18th century naturalist, Joseph Banks.

It soon becomes clear that Fitz is getting involved in something more complicated and dangerous than just the search for a stuffed bird. To solve the puzzle, he must uncover the identity of the amazing woman Banks loved – a woman who has disappeared from history as effectively as the specimen he is hunting.

Spanning three centuries, this book involves a mixture of history, mystery and romance, just right for the darker evenings that are now with us.

Standing on the cliffs of 12th century Ireland following the disappearance of his twin, Hoyt Mac Cionaoith is visited by the goddess Morrigan and is charged with the ultimate task: saving his and all future worlds. His enemy – the beautiful, but deadly vampire queen Lilith – has had over 2,000 years of experience in cruelly killing and changing humans into her own kind, including Hoyt’s brother, Cian. Now, Hoyt, a sorcerer, must travel across the world through time to find and train the five others Morrigan has prophesied will join him and do battle against Lilith’s army of vampires.

Fate brings Hoyt first to Glenna Ward – a modern witch, who can make her own kind of magic. Hoyt and Glenna find themselves drawn together, but is their love strong enough to survive not just the battle ahead, but the centuries that separate them? Other titles in this series are Dance of the Gods and Valley of Silence.

Available in paperback at 11 euros

An Act of Peace

Ann Widdecombe’s enthralling post-war sequel to An Act of Treachery is now available. In, An Act of Peace, Klaus-Pierre is the love-child of a young Frenchwoman and a senior married German officer. Klaus-Pierre never knew his father, who was killed before he was born, and his mother was rejected by her family of patriots and resistance workers.

Cared for by his German family, Klaus-Pierre is loved and happy, but as he grows up in a Europe where old enemies are learning to co-operate, he tries to make his own act of peace with his French relatives. The result is a horrifying confrontation between the two families when they meet accidentally in Provence.

Meanwhile, Klaus-Pierre is struggling with another quest: to come to terms with his roots, as he tries to find out just what kind of man his father really was.

Ann Widdecombe’s novels are growing in popularity and this one is likely to be a bestseller.

Available in paperback at 11 euros