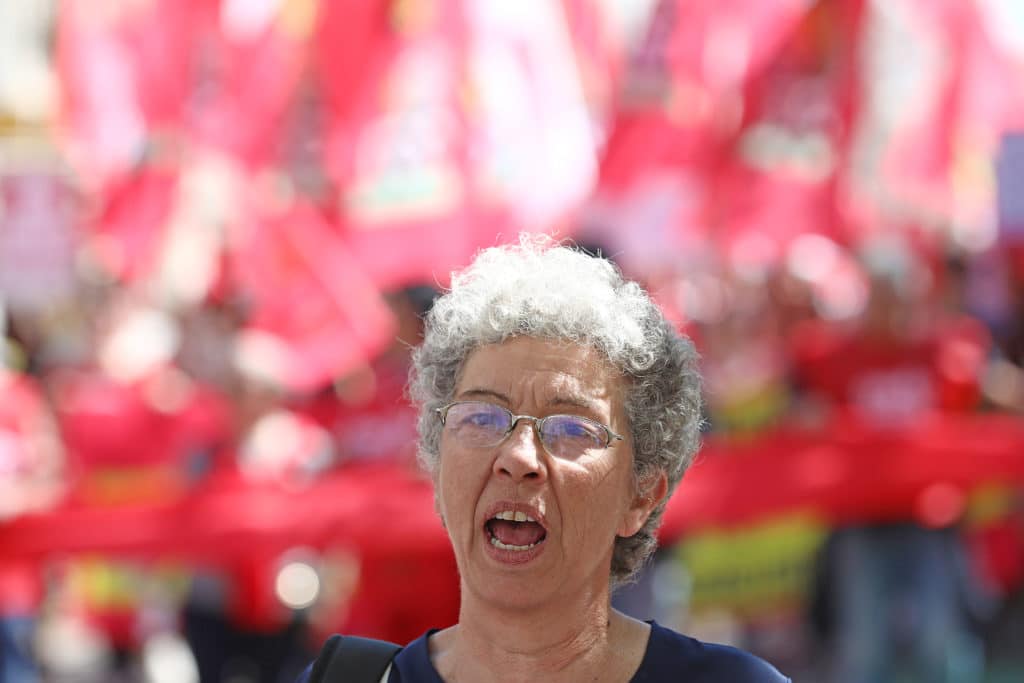 The leader of Portugal’s largest trade union federation, the CGTP, demanded “measures that put an end to price speculation” and limits on price increases yesterday, addressing thousands taking part in a national demonstration staged by the federation in Lisbon.

CGTP general secretary, Isabel Camarinha was speaking at the end of the event that started mid-afternoon in downtown Lisbon’s Marquês de Pombal  and arrived at the parliament building an hour later.

The thousands involved included workers, young people and pensioners from throughout the country, united in the cry for increases in salaries and pensions at a time when inflation continues to soar.

Under scorching heat, in front of the steps of the parliament building, Camarinha greeted “all those who participated in this great demonstration” and stressed workers were taking to the streets “at a time when the increase in exploitation” and an “attempted assault” on wages and pensions is becoming more widespread.

“We demand measures to put an end to price speculation, to regulate prices and to impose limits on increases,” she said, reaffirming that “the struggle will continue with several actions already decided in July and August.”

The general secretary again demanded an across-the-board salary increase of €90, an increase in the statutory minimum wage to €800 “immediately”, and €850 “in the short term“, as well as an end to casual employment.

PCP communist leader Jerónimo de Sousa expressed solidarity with participants – attending the event and saluting all those present for “defending their interests and rights (…) in a very difficult context in which workers are seeing the cost of living increase significantly.

“We are deeply concerned, because the government, at the time of presenting the State Budget, said that inflation was merely cyclical yet yesterday (Wednesday) in the debate held in the assembly acknowledged that inflation is here to stay,” he said.

“Considering what was intended in the previous State Budget, there is a clear worsening in its salary and social dimension, in which the government today, with an absolute majority” appears to be letting run.

The national demo – which ended more than a month of actions organised by the CGTP – took place on the eve of today’s debate in parliament on changes to employment law as part of the decent work agenda.

“We cannot accept working poverty“; “the people united will never be defeated” and “the struggle continues” were some of the slogans chanted as protestors made made their way to parliament.