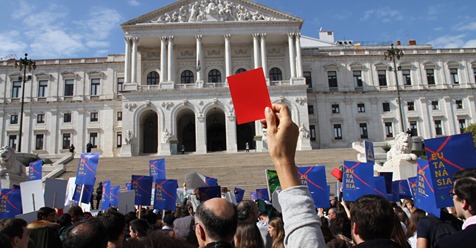 Thousands of people have taken to the street in Lisbon today to voice their opposition to five bills due to come under debate advocating the legalisation of euthanasia.

This perennial ‘hot potato’ has been back in the headlines as ruling PS Socialists, Bloco de Esquerda, PAN, PEV (the Greens) and Initiativa Liberal have all presented their ideas of how euthanasia should be ‘taken on board’.

But political will is clearly not in tune with the people on this topic. Say reports, the majority of people in the placard waving crowds today are young.

Slogans include: “Who are we to kill” and “Yes to Life”.

Leaping onto the political bandwagon has been the new CDS leader Francisco Rodrigues dos Santos – the man who said he wants to make his party ‘sexy’.

Only 31-years-old, dos Santos is criticisng fellow MPs for making light (and political capital) of a matter that they are trying to push through in record time.

None of the parties delivering bills today approached the minefield of debate on the subject during their election campaigns last year – and thus a referendum, in his opinion, is the only sensible way forwards.

Debates are scheduled to go on through the afternoon.

In 2018, four of the parties (Iniciativa Liberal had no representation at that point) presented bills for the de-criminalisation of euthanasia, but they were all defeated.

As a petition pushing for a referendum gathers signatures, the Catholic Church has said it would back this option but is naturally against any de-criminalisation decided by just 230 MPs.