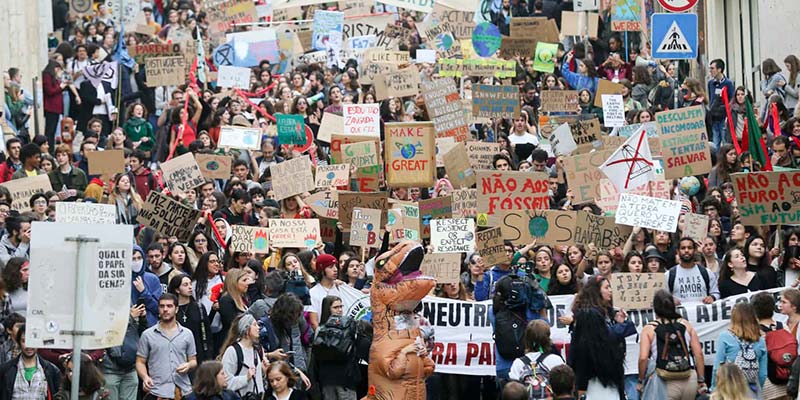 Thousands of activists, most of them young, are protesting in the streets of Lisbon today demanding measures by the government to protect the planet.

Say reports, the underlying message is “everyone knows the solutions but there’s a lack of follow through”.

Affiliated to the Global Climate Strike – very much powered by the actions of one Swedish teen who is on her way by sea to Portugal right now (click here) – the protest today is being mirrored by similar initiatives in other cities throughout the world.

It helps here that non-teaching staff in many schools are on strike today, so more youngsters and children have time to take part.

Said Expresso this morning: “The marchers are nearly all young people from local schools, but there are some older activists like Deolinda Peralta.

“At 67, Deolinda has once again exchanged the comfort of her home to take to the streets to demand measures, carrying a gigantic white cloth on her back with the message: “We have the solutions. The actions are missing”.

As the energetic grandmother told Lusa, it’s not her own slogan. “My granddaughter’s school invented it…”

And for the pupils who couldn’t take part because their school was still running today, Deolinda said, in her opinion, the problem being taken to the streets “is more important than any maths lesson…”

This protest – Portugal’s fourth in support of climate demands so far – is due to wind up outside the gates of parliament.

One of the immediate missions of the day is to “mobilize people for COP25”, the UN conference on climate change, due to start in Madrid on Monday – at which Greta Thunberg will be speaking, as long as her voyage across the Atlantic reaches dry land in time.

Posting onto Facebook from ‘the middle of the ocean” yesterday, the 16-year-old campaigner wrote: “I’m struck by the news that the EU Parliament has declared a climate emergency.
We can’t solve a crisis without treating it as one. Let’s hope they now take drastic sufficient action…”