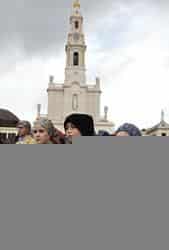 THE MORTAL remains of Sister Lúcia, who saw apparitions of the Virgin Mary in 1917, were moved from the Carmelite convent Carmelo de Santa Teresa of Coimbra, where she died, to the Shrine of Fátima last Sunday (February 19).

Despite intense rain and strong winds, around 100,000 pilgrims took part in the event that included a procession to the Chapel of the Apparitions, Mass and the transferal of the remains to the Basílica of Fátima. The original number of people expected in Fátima last Sunday had been as many as 250,000, however, the bad weather was described as the reason for less people attending the ceremony.

The remains of Sister Lúcia, who died aged 97 on February 13 last year, now rest next to those of her two cousins, Blessed Francisco and Blessed Jacinta, who also witnessed the apparitions of Our Lady of Fátima.

Thousands of pilgrims clutched photographs of Sister Lúcia, many of whom were moved to tears, and there were even children dressed as the three shepherds. It was clearly an event of great religious importance for the people of Portugal – three TV stations covered the event live, offering coverage that lasted most of the day on Sunday. The national press also presented widespread coverage of the occasion.

Thankfully, it was largely a pilgrimage without incident, with police reporting very few problems. The most significant development being that 79 people were registered at the lost persons tent, the majority of whom were elderly and had become separated from their groups. Due to the extremely poor weather conditions, traffic was less heavy than expected, with few delays. There was, however, one crash at 9am on Sunday, on the A1 in the South/North direction, thought to have been caused by the rain. One woman died in the accident and four passengers were injured. In terms of crime, 12 wallets were reported stolen during the day.

Although many in Coimbra see the transferal of the remains as a great loss to their city, the majority agree that they are now in their rightful place, alongside those of her two cousins, the fellow shepherd children and Fátima visionaries. A liturgical memorial was celebrated on Monday of this week.