Portugal Resident
Home Algarve News ‘This is a new beginning’ 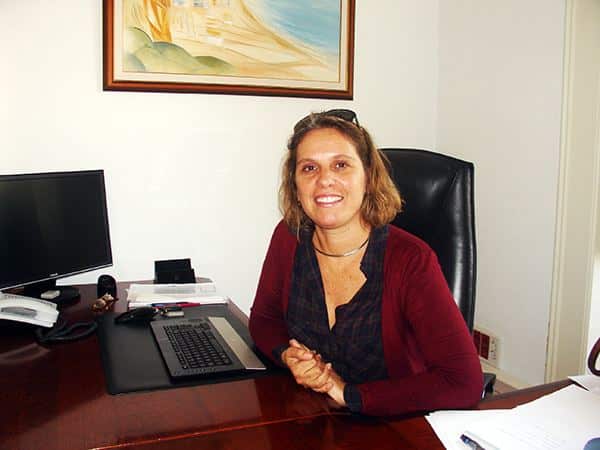 Of the three women elected in September to lead traditionally male-dominated Algarve municipalities, Rosa Palma, 41, a high-school teacher in biology, stood for real change. She snatched victory from the ‘big boys’ – the two parties habitually in power (PS and PSD) – claiming Silves for the CDU (Communist/Green Party alliance). It was a huge surprise. What is Palma’s winning formula? It seems to be good old-fashioned honesty – the desire to offer a real alternative to the ping-pong politics of major parties, which she considers have long since forgotten they are actually here to serve the good of their electorate. The Algarve Resident’s Natasha Donn met Rosa Palma only five days after she had assumed her role of Mayoress in Silves Town Hall and walked straight into a hornet’s nest of problems – almost all of them politically-engineered. She showed us a rare example of transparent local government in action.

“This is a concrete example of the kind of political posturing that has damaged this borough,” she explained as she outlined an issue of the day. “I am about to have a meeting with the people affected. If you have time to sit in on it, you are absolutely welcome.”

These are not the words one expects from a mayor in Portugal. In the old days, it would have taken weeks to get an interview with a newly-elected ‘Presidente da Câmara’, and then all questions would have had to be submitted upfront in writing. There would be no way of accompanying the mayor to a subsequent private meeting … Can things really at last be changing?

“They are in Silves,” said Palma with a ready smile. “The fact that I was successful in the electoral campaign showed me that people are finally looking at what is going on; showing their discontentment with the current form of politics – the way people are not taken into account. The success of the CDU has shown me that people are ready for an alternative and it makes me very happy.”

Rosa Palma only entered the political arena four years ago – for all the reasons she has just outlined. She found herself in the unenviable position of being the deciding vote on a hung administration.

“There were three PSD, three PS and me … I learnt so much in those years, and saw so much done by an executive that was not serving the population.”

The energy and resilience needed to stick to her guns and navigate political intrigue saw friends advising her against running as mayor in the recent elections.

“It would have been very easy to listen to them,” she said. Palma’s expression shows the soul-searching that went into her ultimate decision. “I loved my job as a teacher. I have a good life, but I felt that if there was an alternative that people could believe in, one that would take this borough to a better place, then I had to stay and fight for it.”

So now it’s down to business on a council that has upwards of €8 million in long-term debt, endless legal issues outstanding and some “very delicate situations” about to come bubbling to the surface.

“Some really serious issues,” Palma warns. “I am only coming to understand them now that we are in office and able to go through all the paperwork.

“Everything will come out in due course. Everyone will hear about it”…

But meantime what is in store for this ancient municipality that played such a part in Portugal’s early history?

“Well, there is no money to work with,” said Palma, giving another of her open smiles. “But there are many things that can be done with little money.

“Silves has an incredible wealth of heritage, tradition and history. We want to make the most of it. Promote the ‘medronho’ (traditional brandy made from Arbutus trees), the cork, the honey, the oranges and many, many other regional products.

“Up until now, no administration has invested in the incalculable worth of this borough that stretches from the hills right down to the sea. There is so much here besides the castle – and yet really all we get are buses bringing tourists to the castle and then going away again!

“This is a terrible mistake. So much more could be done to put Silves squarely on the map for sustainable tourism.

“This is another thing I am adamant about. Sustainable, eco-based tourism. We have all seen the mistakes made in the past. Big investments, grandiose structures that now stand empty and abandoned. We cannot just blindly follow, creating more of the same.”

Referring directly to the mega tourist development planned at Praia Grande, alongside Lagoa dos Salgados wetland, Palma commented that promoters Finalgarve (a subsidiary of the giant Galilei group that emerged from the BPN/ SLN banking debacle) are keen to get moving with initial infrastructures.

“We have to look at everything,” she said. “We are all for investment, but it has to take the environment into account. It has to be in the best interests of the population and future generations.

“Nothing can go ahead without a meeting of the Câmara giving the go-ahead to the laying down of infrastructures. That is where we are at the moment.”

This brings us to another reality – another constant battle ahead of Rosa Palma for the next four years. Her administration is without a clear majority. There are three CDU members, two PS and two PSD – and while the two latter parties are usually at loggerheads, they have already shown that they can put their differences aside and vote tactically when it comes to facing the new forward-thinking CDU leadership.

“We are three and they are four,” agrees Rosa Palma. “But I have to believe that reason will speak loudest.

“We are here to show that there are people in politics who honour their words and work for the benefit of those who put their trust in them.

“In the end, it shouldn’t be a question of sexes,” she stresses. “Yes, I believe women bring a greater sensibility to politics and that their involvement is to be welcomed – but both men and women should be able to be trusted.

“This is a new beginning,” she affirms as we walk into the meeting to which we were so suddenly invited. “This is about listening to people.”