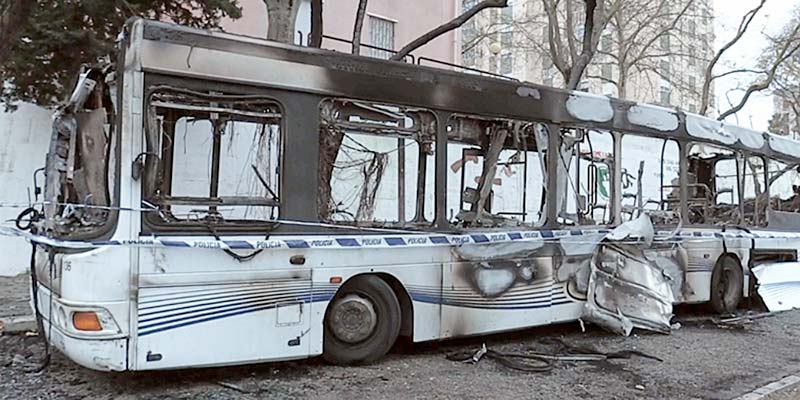 Police in and around Lisbon have been kept busy with further outbreaks of violence following Sunday’s incident in Bairro da Jamaica (click here).

Attacks by various youths saw as many as 30 rubbish bins targeted on both sides of the Tejo river (ie, in and around Lisbon and in the district of Setúbal).

In Setúbal a bus was set alight.

In Loures (near Lisbon) a police car was stoned and hit by an incendiary device following one of many fires in rubbish containers.

Sintra too was a focus for the repeating acts of vandalism that started after 11pm and continued through the night.

Say reports this morning, a number of young teenagers have been arrested. But evidence of extreme left-wing influence is mounting. This morning, tabloid Correio da Manhã, reveals that Mamadou Ba – the man who described police as “bosta da bófia” (very disparaging and translatable as ‘excrement’) – is a special advisor to the Bloco de Esquerda party who has been paid handsomely in the past for his services in the context of SOS Racism.

SOS Racism has played a role in this story, decrying allegedly racist behaviour of the PSP police service.

Bá has “shown himself unavailable to talk” to the paper, while a petition is said to be circulating for his removal from the council’s municipal assembly.

Meantime, security service personnel are said to be monitoring social media activity in a bid to “anticipate new acts of violence”.

PJ police are also on the ground, “investigating the origin of the incendiary devices that have been used in the attacks”.

Media sources have revealed that the government is also looking into the possibility of providing police with ‘bodycam’ (body cameras). It is one of the demands that have come from syndicates since the Bairro da Jamaica ‘incident’ hit the headlines.