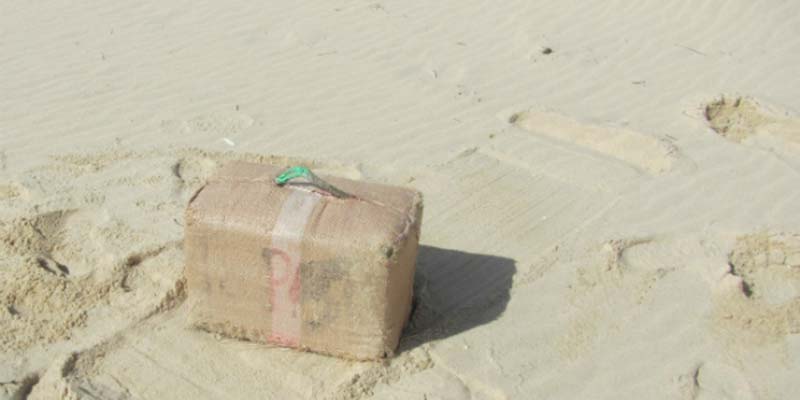 Eyes are peeled this week as yet another 30 kilo bale of hashish has ‘washed up’ on an Algarve shore.

Authorities are working hard at recovering these bales before locals spot them and ‘think big’.

More than a few families have snaffled bales like these away – sometimes for years – selling the drugs off piecemeal to help with household bills.

Indeed, the mere notice of ‘yet another bale’ will have numerous ‘chancers’ on their toes and scouring shorelines.

The latest find was discovered by maritime police on Tuesday morning on Culatra island, opposite Faro.

Say reports, “it is the third haul of drugs to have been found in the space of a week in the region”.

The first was recovered from the sea, bobbing 7kms off the coast of Albufeira, while a few days later a pack of white powder “that appeared to be cocaine” was discovered by a walker enjoying a stroll on a beach in Alvor.

All three finds are now with PJ police. But were there more? And will they bob to the surface or wash up on a beach?

This is the question keeping police occupied.

The drugs could be related to the discovery of a high-speed powerboat (the kind used by traffickers running drugs between Africa and Europe) adrift, again off the coast of Albufeira, around the time the first hashish bale was discovered.

The boat was spotted by an Air Force plane and has since been towed into Portimão’s ‘Ponto de Apoio Naval’.

Correio da Manhã stresses police have mounted searches in all the areas where drugs have appeared, but so far, they have not found any trace of further bales or suspicious-looking packages.

The week’s ‘surprises’ are all thought to be related to the south-westerly currents.