Portugal Resident
Home Algarve News “They were going to shoot me and sell my fiancée as a... 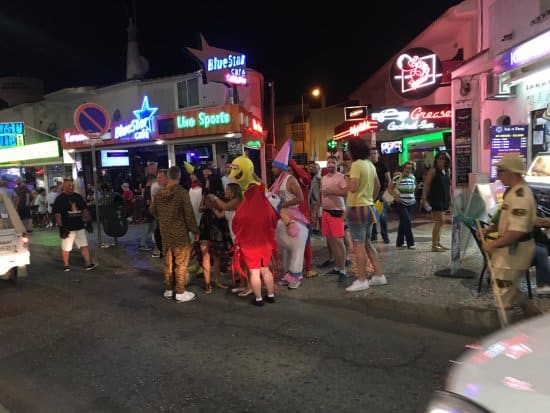 In a story published on an Irish news website, a couple visiting Albufeira claim to have been forced into a car at gunpoint by three men on the notorious strip, robbed of all their money and kept as hostages for almost an hour.

With the dramatic headline: “They were going to shoot me and sell my fiancée as a sex slave”, the account however is garbled.

As one reader of the online account on thejournal.ie remarked: “I’ve read it about five times and it makes less sense each time”.

Nevertheless, the story includes a link to an Irish radio station where a 18 minute-long interview puts more ‘flesh on the bones’ of what does indeed sound like an horrific experience.

Donegal man Dermot (no surname, no age) claims he and his ‘partner’ (again no name, no age) were walking up the strip in Albufeira (last Sunday night, time not specified ) when three men ‘coming out of a bakery’ bundled them into a car and took them up a back lane.

In the car, one of the men threatened to shoot Dermot in the head and sell his fiancée to his boss “for sexual needs and so on”.

“They took all our money off us”, Dermot told RTÉ’s host described only as ‘Joe’.

After apparently being taken to their hotel to pick up bank cards, the couple was then driven to an ATM where the fiancée was allowed out of the car with one of the cards to withdraw money.

As Dermot had apparently given her a card for an account that had no money in it, she was unsuccessful.

“Out of the blue” the captors let Dermot out of the car, apparently to help her, thejournal continues.

He and his partner “then decided to run off” and “went to the nearest bar”.

Somewhere in the drama, Dermot sprained his foot, but as he told Joe, purportedly from Faro airport about to board a Ryanair plane back to Ireland, he feels “very lucky to be alive”.

The only good aspect coming out of this story is that police appear to know exactly who they are looking for (Dermot claims to have identified the perpetrators from photographs) and are planning to round them up this weekend.

If the men, described as “Portuguese gypsies known for this type of crime”, brandish a gun, Dermot told Joe that police have said they will be shooting to kill.

As Joe says at least once during the phone interview: “Portugal is not coming out well out of this now”.

But Dermot appears to blame his insurance company for much of the ordeal, saying it had done nothing to help.

Even worse, the couple appear to have been ‘robbed again’, as they slept in their hotel – with the hotel “doing absolutely nothing” about it.

It’s a harrowing tale, and one that RTÉ’s host described twice as “a holiday from hell”.

Dermot however praised the Portuguese police, saying they were “very, very helpful” and “not cheeky”.

For the details of the interview in full, click here

Faro PJ meantime have confirmed that they are “investigating”.

Photo: an image of the strip showing revellers dressed for a hen night