For the past two years, Carl Wilson, João Caetano and Jodi Weijdom have, quite literally, poured their heart and soul into their distillery Alma Luz and the creation of their signature gin. Not only is it versatile, but its authentic hints and flavours are handpicked from the Algarve.

The juniper-based spirit has come a long way since the Dutch started producing Genever back in the 16th century. Its rapid increase in popularity, particularly in the UK in the 18th century, introduced an era of gin-induced mania and death in a period named The Gin Craze. In fact, the UK Parliament passed at least five major legislative acts in an attempt to rein in the population’s gin consumption. Fortunately for gin lovers today, it is now considered a fashionable ‘craft cocktail’ drink and has regained extreme popularity, minus the casualties.

Both experienced bartenders, Carl and Jodi have always had a passion for creating gin-based cocktails, whilst João works as a head chef on private yachts around the world. When talking to the team, they expressed their frustration in trying to find the perfect gin to complement other flavours — a gin they could be creative with, especially with flavours of the Algarve. With João’s taste buds and Carl and Jodi’s mixology knowledge, the three entrepreneurial friends started to create the criteria for their new venture.

To make a dry gin you need to use five main ingredients: juniper berries, coriander seeds, angelica root, cassia bark and orris root. Although some of these ingredients must be imported, Alma Luz distillery still has a huge focus on using local products to keep the gin authentic, and the flavourings are sourced from local farms across the Algarve.

“Our artisanal signature gin is distilled in the Algarve using carefully selected plants and the freshest local ingredients. We aim to capture the ‘alma’ of the Algarve, the soul of our homeland in every bottle,” the team explains. The final product has “notes of Algarvian lemons and grapefruits, aromas of handpicked rosemary and lemon verbena blended with the warmth of a black pepper finish”.

The production process has also been kept as authentic and traditional as possible. During the Islamic reign, the Portuguese adopted many of their artisanal processes, including distilling techniques.

The three entrepreneurs chose to use a traditional copper pot called the “alembic still”, which was developed in 800 AD. Derived from the Arab word “al-aniq”, meaning “still” or “that which refines”, alembic is a technique also used to make essential oils and very similar to the way the Portuguese make their beloved Medronho firewater.

Everything, even down to the appearance, has been carefully considered. The 70cl bottle and its label have been delicately designed to replicate a standout feature and arguably the ‘soul’ of Luz using the image of the famous Black Rock cliff and its striking volcanic colours. The bottle is then sealed with black wax, and the word ‘alma’ (meaning ‘soul’ in Portuguese) is stamped across the top.

Jodi and João grew up together in Luz, whilst Carl moved here in 2008. Their strong bond and long friendship have proven to be a great foundation for their joint venture, especially as they embarked on this journey as the pandemic emerged.

“We didn’t just sit around watching Netflix! We did everything we could within the restrictions to develop the product, source the ingredients, tools and machinery,” they say. “We wanted to be productive and put our energy into creating something people could enjoy.”

Admirably, Carl, Jodi and João are completely self-taught in terms of “learning the craft as well as learning how to set up a business”. They have had no investors and have funded everything directly from their own pockets.

Their artisanal licence means they can only produce small batches at first, so stock will be limited. But, as they grow, they can look forward to moving to larger premises, which, of course, would mean more gin.

In the future, they hope “to share the bottled soul of Luz with gin lovers across the Algarve, nationwide and internationally”. Their goal is for their product to become a “staple gin” rather than just a gift you may buy for someone. Like some distilleries in the UK, they wish to have their own premises to hold activities such as masterclasses and guided tours.

Between a pandemic, a baby born, two babies on the way and two engagements, Carl, Jodi and João have certainly had their hands full but have continued to stay focused and put 100% into their venture.

At the time of print, Alma Luz was set to make its debut on the shelves of local supermarkets, bars and restaurants from Lagos to Sagres in mid-December 2021, just in time for Christmas. 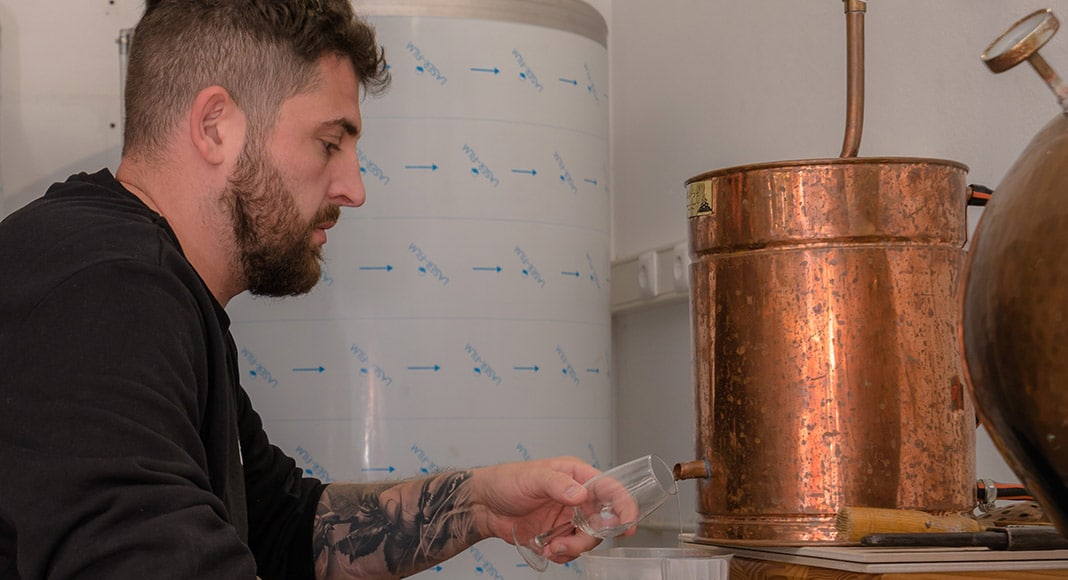 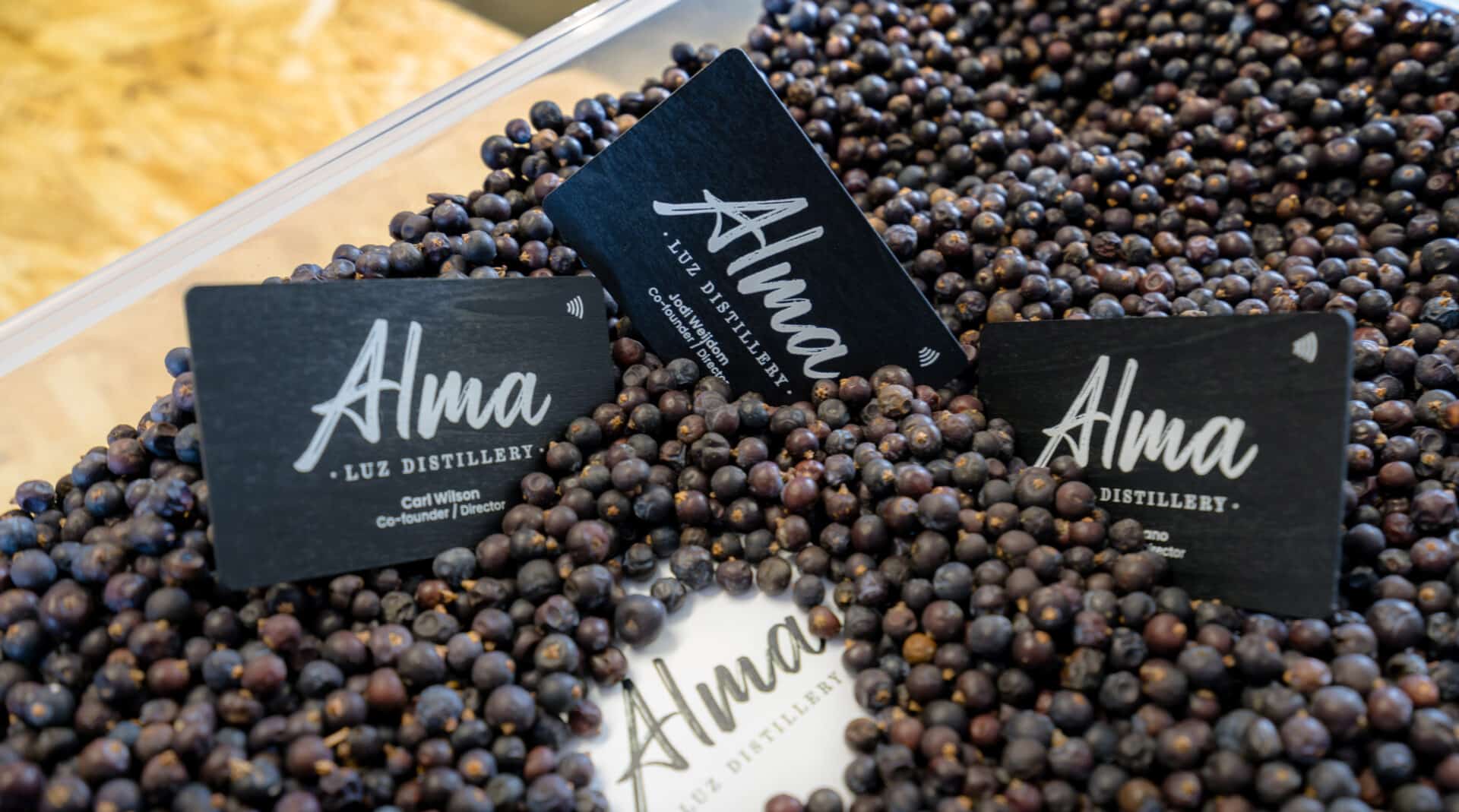 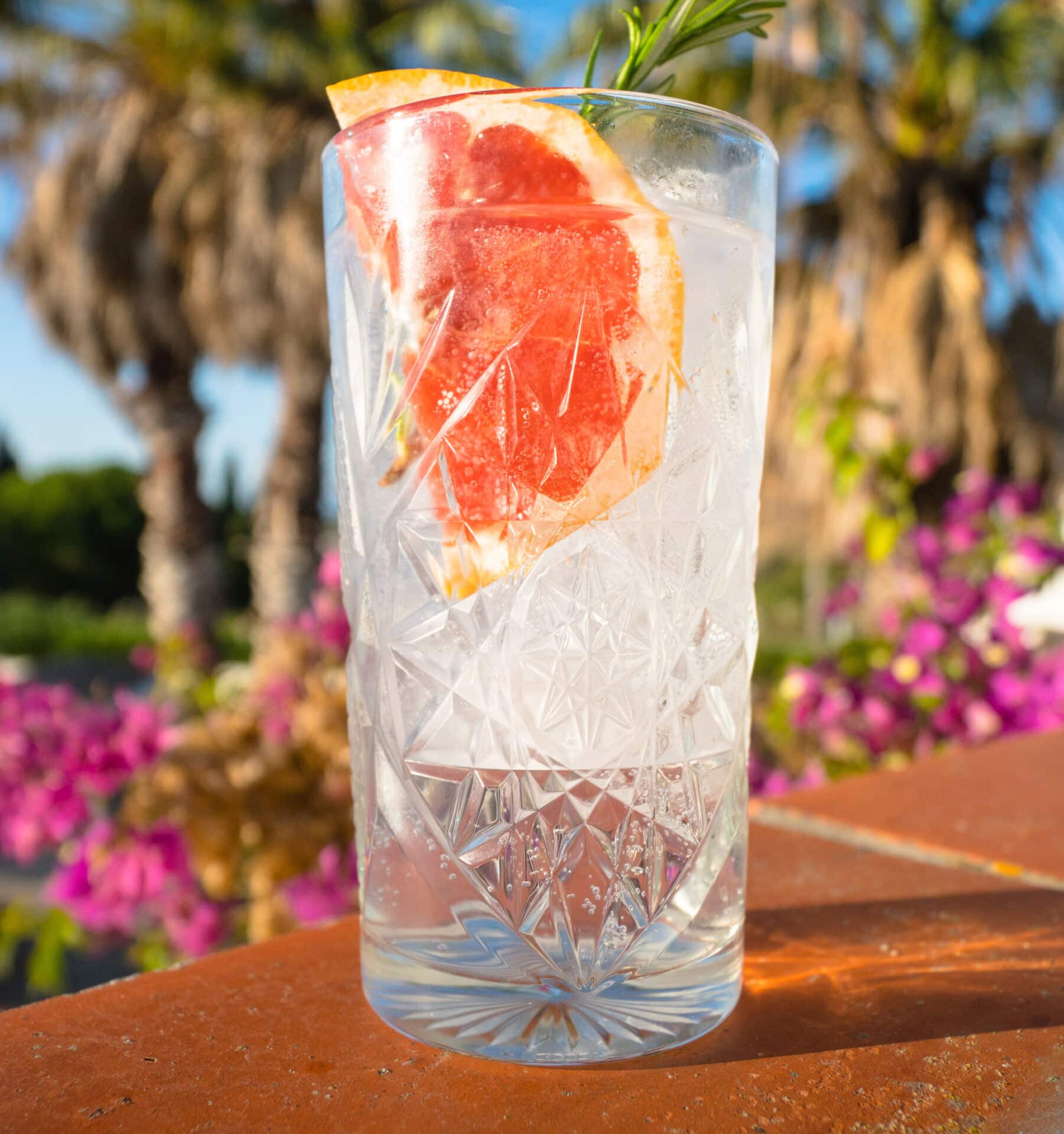 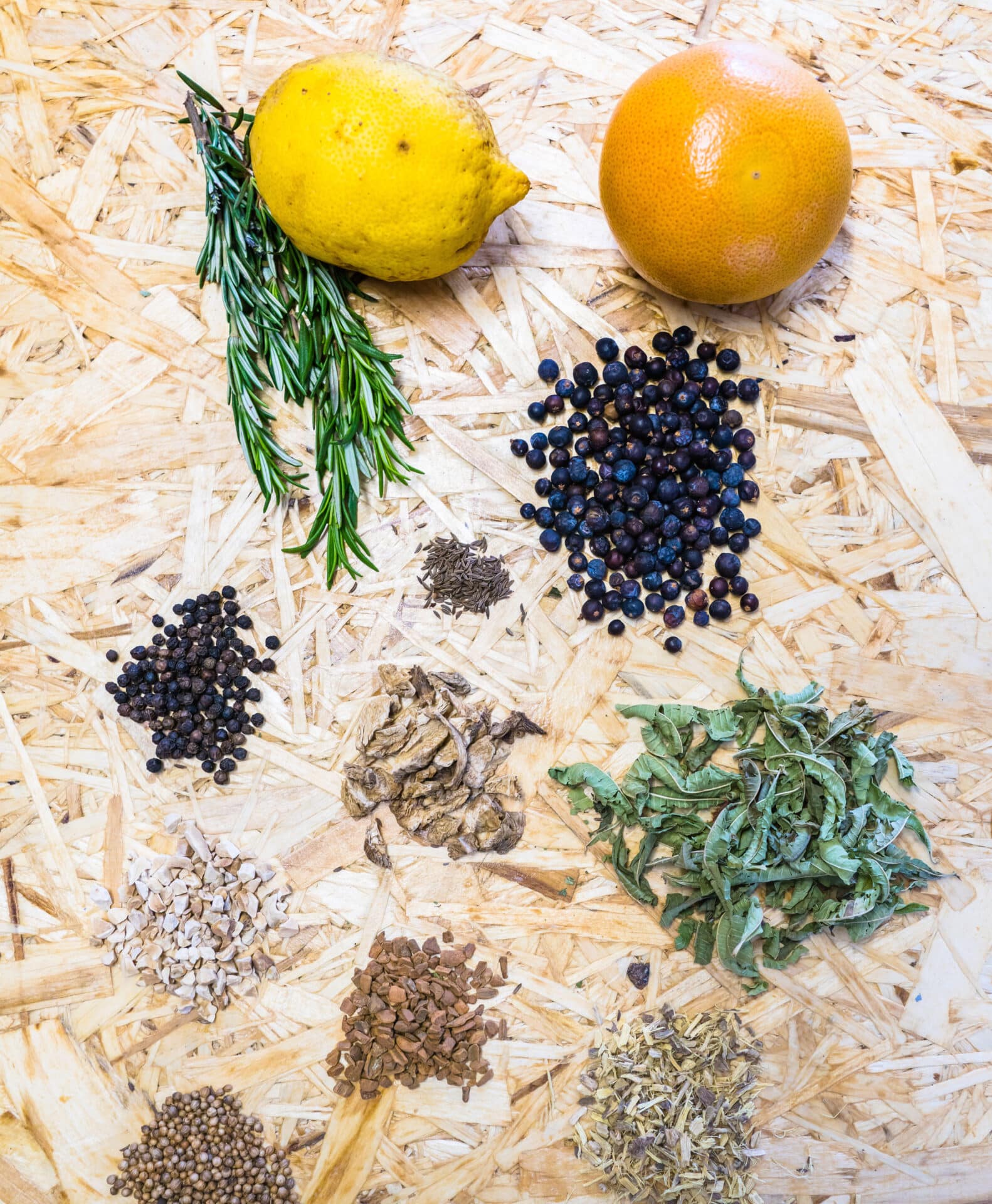 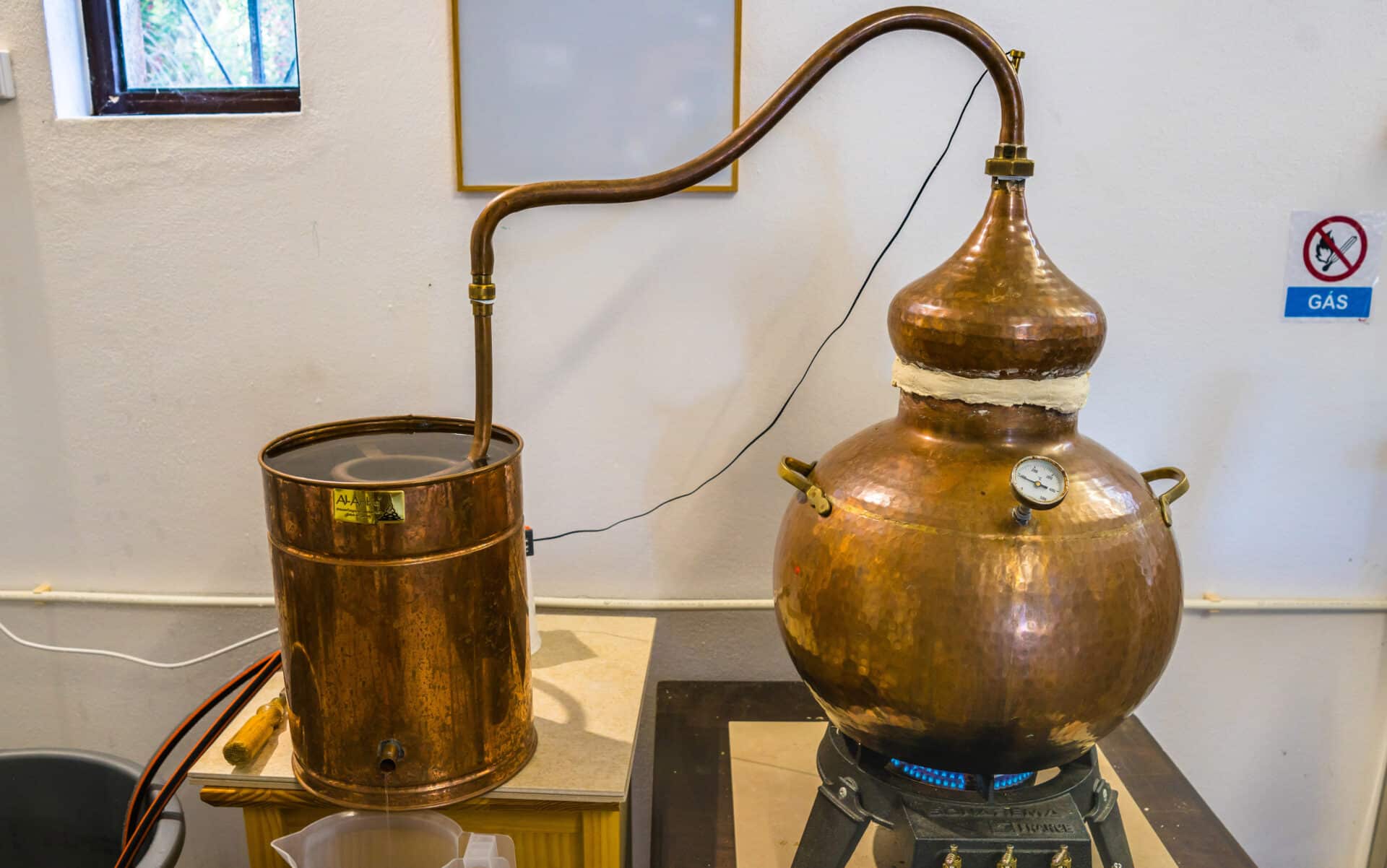