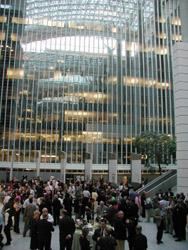 How can the investor benefit from their efforts?

THE WORLD Bank and the International Monetary Fund (IMF) have announced that they are setting up a task force to combat fraud and corruption.

The World Bank has described corruption as the “single greatest obstacle to economic and social development”. Over one trillion dollars was paid in bribes in 2003 and this figure did not include embezzlement of public funds or theft of public assets.

Transparency International’s annual Global Corruption Barometer Survey revealed that taking bribes was prevalent in Africa, and that households in some African countries spent over 20 per cent of their income on paying bribes. The World Bank believes that countries which tackle corruption successfully can quadruple their national income.

Even though they are similar, the World Bank and the IMF do differ. Both have headquarters in Washington DC and both are owned by 184 member countries. In addition, both were born out of the United Nations Monetary and Financial Conference held in Bretton Woods, New Hampshire, America, in 1944. The IMF is sometimes referred to as ‘a Bretton Woods institution’, along with the International Bank for Reconstruction and Development (IBRD), now part of the World Bank.

The IBRD was founded as a facilitator of post Second World War reconstruction and development. Today, along with the International Development Association (IDA), it has a mandate to alleviate worldwide poverty.

Although reconstruction remains a large part of its work, the World Bank provides low interest loans, interest free credit and grants to developing countries for education, health, infrastructure and communications, as well as for many other purposes.

The IBRD focuses on middle income and creditworthy poor countries and the IDA focuses on the world’s poorest countries.

Since 1996, the World Bank has launched hundreds of governance and anti-corruption programmes in 100 developing countries. The World Bank is committed to ensuring that the projects it funds are corruption free by setting strict guidelines and providing a hotline for fraud and corruption reporting.

By comparison, the IMF oversees the global financial system by monitoring balance of payments and exchange rates. It describes itself as an international organisation working to foster global monetary co-operation, secure financial stability and sustain economic growth.

Following the financial depression of the 1930s and the Second World War, the IMF was created to restore international monetary relations, to promote the elimination of exchange restrictions relating to trade in goods and services, and to stabilise exchange rates.

The IMF’s Articles of Agreement constitutes a code of conduct that requires member countries to allow their currency to be exchanged for foreign currencies freely and without restriction. Member countries also have to inform the IMF of any considered changes in financial and monetary policies that could affect other member countries’ economies, and to adjust these policies if recommended by the IMF to accommodate the needs of the membership. The IMF is funded by subscriptions from member countries that can then have assistance from the IMF’s financial resources in time of need.

The IMF has recently drawn some criticism for quite a variety of reasons, one being apathy to democracy. However, those in support of the IMF claim that economic stability is a precursor to democracy.

Other criticism is that its success is limited. Formed to help steady global economy, during the last quarter of a century or more, over 100 countries have experienced a banking collapse that reduced GDP by four per cent more than at any time previously. Another criticism is over the time it takes for the IMF to respond to a crisis –  the fact that it tends to only respond to, rather than prevent such situations – has led many economists to argue for reform.

Despite its critics, the IMF can boast some achievements. The debt crisis of the 1980s which threatened a global collapse of financial systems is thought to have been largely contained by the IMF. It helped to establish market-based economies in former Soviet Union countries and reacted quickly to the Mexican peso crisis in 1994.

The increased ease of international travel, purchase of foreign goods and properties in the sun, and the exchange of foreign currency can be attributed largely to the efforts of the IMF.

The World Bank is an investment bank. It lends and borrows between investors and countries receiving the loan. Rich nations and private individuals cannot borrow from the World Bank, which lends only to creditworthy governments of developing nations.

Most of the funding is obtained through the issue of government bonds that have a high investment rating, as repayment is guaranteed through member countries. The World Bank is a major borrower on the international bond market and also borrows money by selling bonds to governments and central banks.

Bonds issued by developing and emerging markets return high income yields, as the risk is slightly more than for bonds issued by the more developed nations. An important factor in a successful investment portfolio, bonds should be included along with equities and cash from diversified sectors for potential consistent and favourable rewards. Bonds issued by the emerging and developing economies are a very dynamic asset class that promises to be very rewarding as part of a diversified portfolio, over the longer term.

To find out more about bonds and investment portfolios, seek the advice of an independent financial adviser who can give professional guidance on financial planning and wealth management.

• To keep in touch with the latest developments in the offshore world, check out the weekly news update on our website, www.blevinsfranks.com