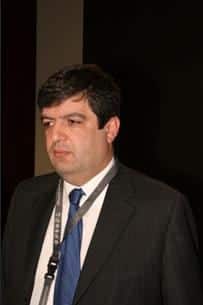 A COMBINATION of more low-cost airlines and increased passenger numbers from the UK meant Faro airport was able to announce a positive annual traffic report for 2007 last week.

António Correia Mendes, the airport director, and Francisco Vieira Pita, the head of marketing and customer service at the airport, also announced the new summer timetable for the airport.

tourists well and we want to continue the good service of the airport”.

World tourism is continuing to rise and has led to an estimated increase in airline passengers by 5.7 per cent across the globe in 2007.

This is an unexpected rise in a climate of financial insecurity, rising fuel prices and terrorism.

Passenger numbers at the Portuguese airports run by ANA have increased at a higher rate than world passenger levels and although domestic air traffic fell by 2.1 per cent last year, overall growth in passenger numbers was recorded at 8.6 per cent.

The majority of the passengers that use the airport are from the UK and more than 2.3 million passengers from Britain are expected over the summer period at Faro airport, accounting for 61 per cent of the total number of passengers and a six per cent rise on the same period last year.

German and Spanish passenger numbers have fallen but the biggest reduction in passengers, 38 per cent, is from the domestic market.

Three new services to new destinations, Lyon, Galway and Waterford, were announced by Francisco Vieira Pita.  A further 11 new services to destinations already catered for by the airport were also revealed, including 13 flights a week to Gatwick by British Airways, three flights a week to Stansted and a further three weekly flights by easyjet to Glasgow during the summer timetable.

Francisco Vieira Pita told The Resident: “The increase in passengers at Faro has largely been due to the number of low-cost airlines using the airport.”

António Correia Mendes reiterated this when he said: “The increased market in Ireland with low-cost airlines has accounted for part of the increase in passenger numbers.”

Some 95 per cent of all the scheduled flights at Faro are accounted for by low-cost airlines, with easyjet being the airline with most flights at the airport and increasing flight numbers by 45 per cent on the numbers last year.

With the summer season just beginning and more than 50 per cent of the annual number of passengers being expected over the next four months (June to September), Faro airport is confident that this will be another successful season for them.

The new summer timetable at the airport is applicable from April to October this and the information contained in the timetable is available to view at www.aeroportodefaro.com.pt (available in English and Portuguese).