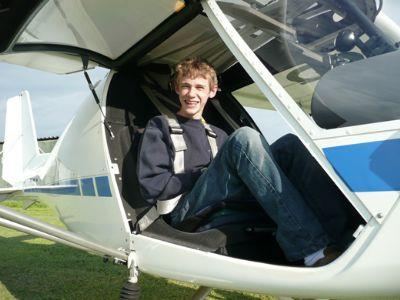 Harrison Nall-Smith from Crosby in Liverpool has been awarded this year’s Manuela Breen Microlight Scholarship from the Algarve Airsports Centre, proving that having a disability does not stop you from living your dream.

The 15 -year old cerebral palsy sufferer was flown out to the Algarve with his mother Colette and sister Chloe and provided with pilot training by Gerry Breen, the founder of the Algarve Airsports Centre.

Gerry Breen said: “Harrison showed a keen interest in flying despite his disabilities and he regularly attended his local flying club in order to help in any way he could. We also received several letters supporting his application from other club members, including retired airline pilot Cedric Flood.”

As part of the scholarship, Harrison was given five hours flying training, pre-flight briefings as well as flights to and from the Algarve and accommodation for a week between April 13 and 19.

“Harrison showed unusually high standards of co-ordination skill not seen in many people of his age let alone someone with his condition,” said Gerry.

He added: “Due to this and the fact that he showed such determination to do well, we have decided to honour him with a special award which will allow him to continue to National Private Pilots Licence (NPPL) standard at the Algarve Airsports Centre.”

Thanks to the skills demonstrated by Harrison while in the Algarve, Gerry is now considering altering the award to restrict entry to those with similar disabilities.

The Manuela Breen Microlight Scholarship Trophy is currently open to young British residents between the ages of 14 and 21 who display a keen interest in microlight flying taking into consideration family and financial circumstances.

For further information about the scholarship, please contact Gerry Breen by calling 282 762 906 or email fly@gerrybreen.com.