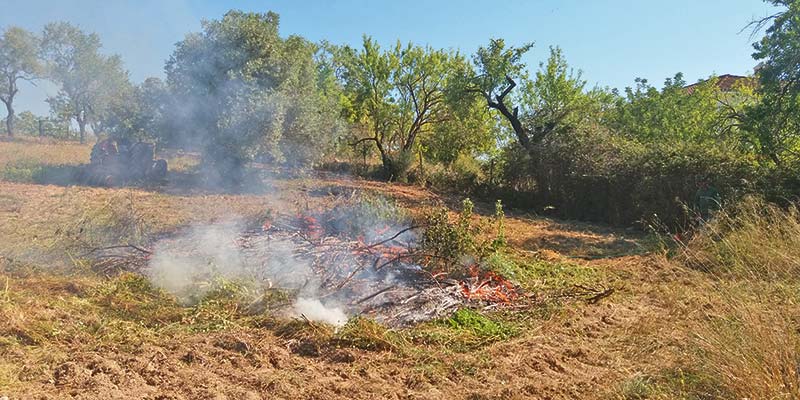 The timing of this article, just two weeks before the critical fire period, may come as a surprise to some, but there is a good reason for doing so.

Many people have conducted extensive burnings of uncut vegetation (queimadas) and many more will have spent time burning cut and piled debris (queimas). Those who have not, may have planned to do so, but their plans were put on hold due to the prohibition of all such burnings declared by the Ministry of Internal Administration and Ministry of Agriculture, Forestry and Rural Development issued on May 24 until May 30 and a subsequent notice extending this to June 3.

The result of this means there could well be a rush to conduct such burnings before the critical fire period (CFP), which is expected to start on July 1 and be in place until September 30.

Of course, leaving it this late increases the fire risk as temperatures are expected to be higher closer to the end of this month and humidity lower.

It is, therefore, essential that when undertaking such burnings that people follow the laws and guidelines that are in place to safeguard the population and property.

Why are such burnings necessary anyway?

According to AGIF (Agência para a Gestão Integrada de Fogos Rurais), of the rural fires in 2018, some 40% originated from extensive burning of vegetation, pastures and stubble elimination and 19% in burnings to eliminate leftovers from exploitation.

We cannot forget that 85% of fires start within 500 metres of a settlement. It is human activity that causes accidents and 70% of the incidents result from poorly made fires, both extensive burnings and cut and piled debris.

So, my fear is that in the rush to conduct burnings before the CFP, people may be tempted to take short cuts, which may lead to uncontrolled fires during a period when the fire risk is high – hence the timing of this article.

Before conducting a burning
If you are planning to burn piled and cut debris, then you need to contact the local Bombeiros, call the national hotline 800 200 520 or apply online using the ICNF online application process. You will then be given a reference that permits you to do so. It is important to note, however, that on the day you have been given earlier permission to burn, if the fire risk is very high or above, or there is a government prohibition order in place, then you cannot go ahead.

In the case of conducting extensive burnings, then you require a licence from your City Hall and possible technical support. In this case, if the fire risk is high or above you cannot go ahead with the burn or a government prohibition order in place.

Safety when conducting burnings
The most basic advice is to choose cloudy days; take your mobile phone with you so you can raise the alarm in the case of fire and have someone else with you when you undertake the burn. Do not undertake controlled burns when the weather is hot and dry or when it is windy.

One good piece of advice is to start the fire early in the morning, when it is cooler and damper, and allows you more time to monitor the fire and prevent any re-ignition late at night.

Move the pile of leftover materials that you are going to burn away from grazing land, woods, scrubland and trees.

Make a vegetation-free firebreak around the things that you are going to burn. Wet the firebreak before you start the burn. Have a water supply or a hose alongside the site of the burn.

Make several small piles instead of big ones. Burn the left-over waste in batches. Stay vigilant. If any sparks fly, put them out immediately.

Leaving a burn unattended is prohibited. Pay attention to changes in the wind. Protect yourself from the smoke by covering your mouth and nose with damp cloths or a smoke mask. Inhaling smoke can be fatal. If the burn gets out of control, keep a safe distance and dial 112.

It is important that these tips are followed as many fires are caused by fires that have been left to burn without being properly extinguished. Keep burning until only ashes are left. Turn over the burnt remains to see if any small flames still persist. Put the burn site out with water or by throwing earth on top of it. Do not leave the site until you have checked that there is no smoke coming from the ashes.

If you are using local farmers and/or contractors to burn debris on your land, ensure that they follow this advice.

Some tips to avoid this are: avoid using metal blades in strimmers, use only nylon cord; do not refuel equipment whilst machine is hot; refuel in cooler place not on inflammable vegetation; keep spare fuel containers in a cool place away from vegetation; ensure equipment does not become overheated; avoid leaving equipment unattended whilst it is running and, lastly, do not smoke whilst using such equipment.

Some of these are obvious but if everyone followed this, it would help reduce the risk of fires.