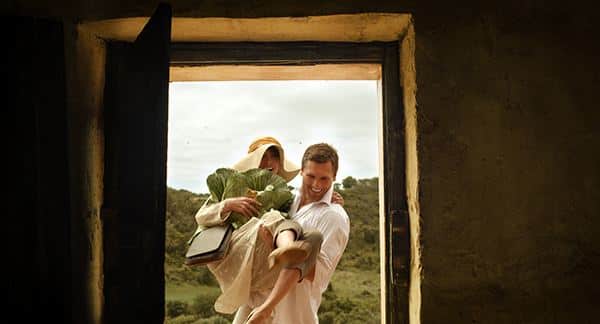 It’s finally happening! The Right Juice, the first English language full-length feature film ever to be shot exclusively in the Algarve, is getting the premiere it dreamed of.
Right in the heart of the Algarve, at the prestige Teatro das Figuras in Faro, the movie made-on-a-shoestring is at last getting noticed.
In fact, the way it got noticed is as much a fairytale as the story behind it.
The film’s producer, BJ Boulter explained: “We were being followed online! No one in the Portuguese film industry could quite believe we could make a film the way we did. People think independent films are those that are not made by national film funding or worldwide movie producers. They can’t believe you can make a whole movie through crowdfunding, local support, donations and basically lots of goodwill.”
Thus, a ‘bright spark’ at NOS Lusomundo started tracking The Right Juice as it embarked on its incredible journey in April 2011. He watched the film raise money, go on location throughout the Algarve, create its own publicity and set out on the festival circuit.
What he saw impressed him enough to be instrumental in the national distribution deal that has now been signed with NOS Lusomundo, with the premiere to be held on Friday, August 29 at Faro’s Teatro das Figuras.
It is the ‘kick-start’ The Right Juice has been waiting for.
The plan now is to consolidate on this latest boost and get social media support from fans to take the movie overseas.
But for the moment, the good news is that everyone in the Algarve can delight in a homegrown movie with a wonderful message.
As award-winning director Kristjan Knigge explained during the film’s making, The Right Juice is proof that the Algarve is a film-maker’s paradise.
“It’s a marvellous place for creating maximum impact at minimum cost,” he told the Resident. “That’s what we’ve tried to show – with a lot of help along the way.”
The Resident is delighted to be able to offer discounted tickets to The Right Juice premiere online. See our next edition for details.
By NATASHA DONN news@algarveresident.com
Photo: Actors Mark Killeen and Ellie Chidzey play husband and wife Oliver and Sally