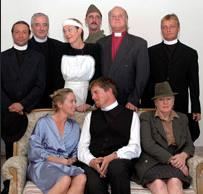 See how they run!

AN EAGERLY anticipated production of See how they run! by the A Portada theatrical group will take place at the Vale do Lobo Auditorium on February 23 and 24.

The play, which has been described as “a fine example of classic British humour”, centres on the highly conservative parishioners of the rural village of Merton-cum-Middlewick during the Second World War. The frivolous antics of a former actress and the arrival of a German prisoner of war in this peaceful village lead to a number of misunderstandings and general uproar.

The play was written by Philip King, directed by Priscilla Morgan and performed in English with a line-up of nine actors, including Touche Smyth as the high-spirited Penelope, Simon Tancott as Lance-Corp Clive and Charles Saunders in the role of the Reverend Toop.

The February 23 performance begins at 8pm and 5pm on February 24. The play lasts for around two hours, with bar service available before the play and during the 15 minute interval.

Tickets are priced at 22 euros per person and 11 euros for children under the age of 16.

TWO PAIRS of tickets are up for grabs for the A Portada theatrical group’s production of See how they run! on February 23 and 24. To enter, simply answer the following question:

During which war is See how they run! set?

Email your answer to news@portugalresident.com or fax 282 342 939 and ensure that you include your full name, address and a contact telephone number. Any entries which do not have a telephone number cannot be accepted. All entries will be placed in a draw and the two first correct answers to be picked will be the winners. The closing date for this competition is Tuesday, February 19 at midday. The Resident’s competition rules apply.