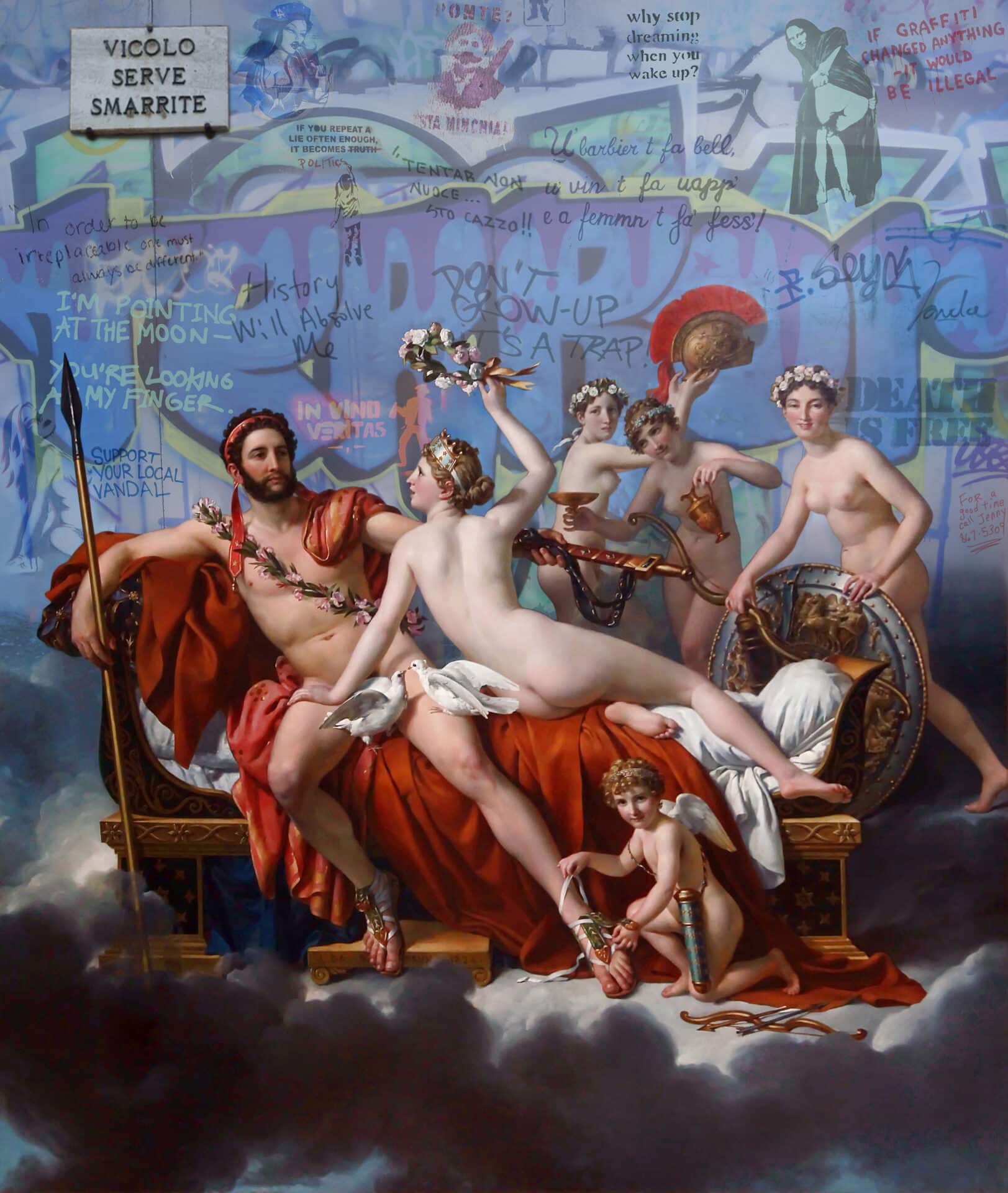 Originally from Verona, Italy, Marco Battaglini’s main interest was always in the Old Masters, be it Michelangelo or Leonardo da Vinci, and the Renaissance, but also the Baroque and the Rococo periods as well.

One of the most fascinating parts of Battaglini’s practice is the way that he has combined his love and passion for the Old Masters’ craftsmanship with contemporary vernacular language, i.e. an urban art language, through the use of graffiti, tags, stencils and texts. There is a duality, a look at the past as well as an insight into the present. 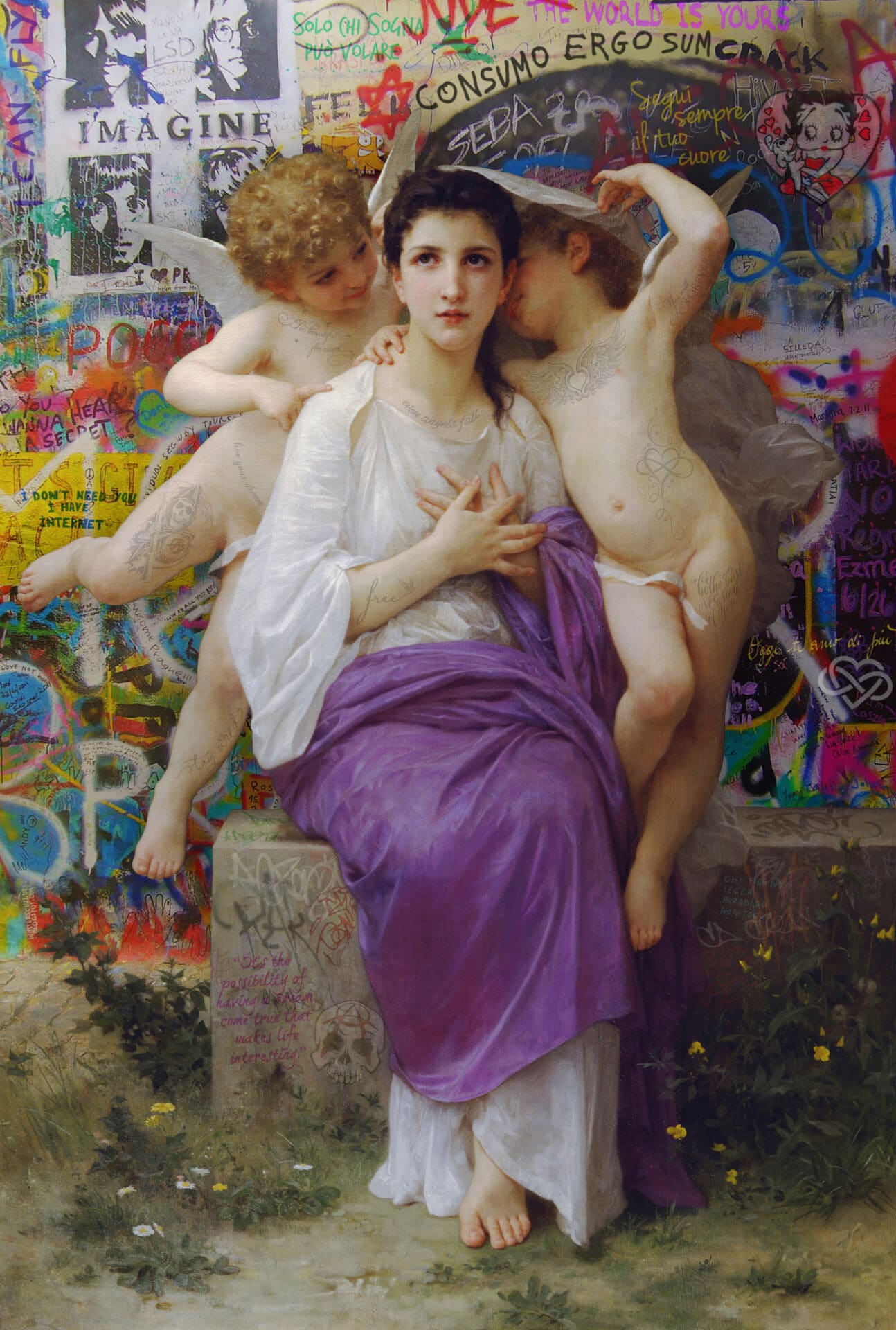 Many great artists have rifted on the Old Masters, be it Pop painter Roy Lichtenstein, working with an image of the Mona Lisa, or more contemporary figures, such as Banksy’s reimagining of Monet’s Giverny garden scene with the water lilies, but this time featuring urban waste like a shopping cart and a traffic cone. So, there is something very humorous going on here; there is something very modern that is a comment on what has been and what is now. We have a classical look at beauty and aesthetics combined with contemporary urban art. 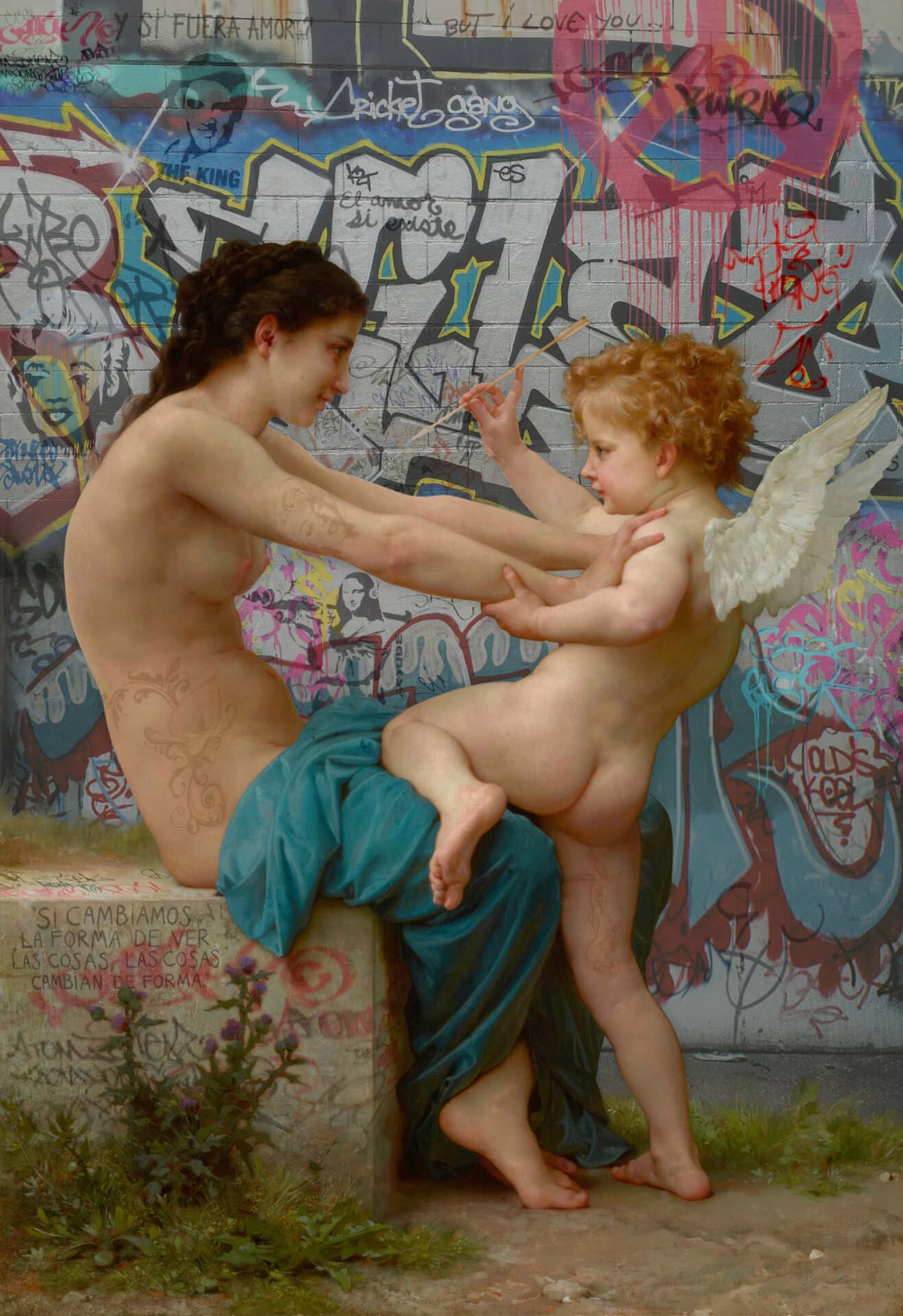 In Marco Battaglini’s work, we are presented with winged putti (chubby, nude boys) and heroic Roman figures from mythology and classical legends. He was obviously inspired by great classic artists, as well as artists from the Neoclassicism period, such as the French painter Jacques-Louis David. What Battaglini has done with these historical paintings is to reimagine them, infusing them with an urban language. He has isolated these figures and placed them into a background which is definitely a very modern and contemporary context. Even the figures themselves are reworked, so we will be able to see the tattoos or the inking on them. The little cupids or naked female forms have some sort of remarking and or remaking, constantly creating a dynamic between the past and the present. 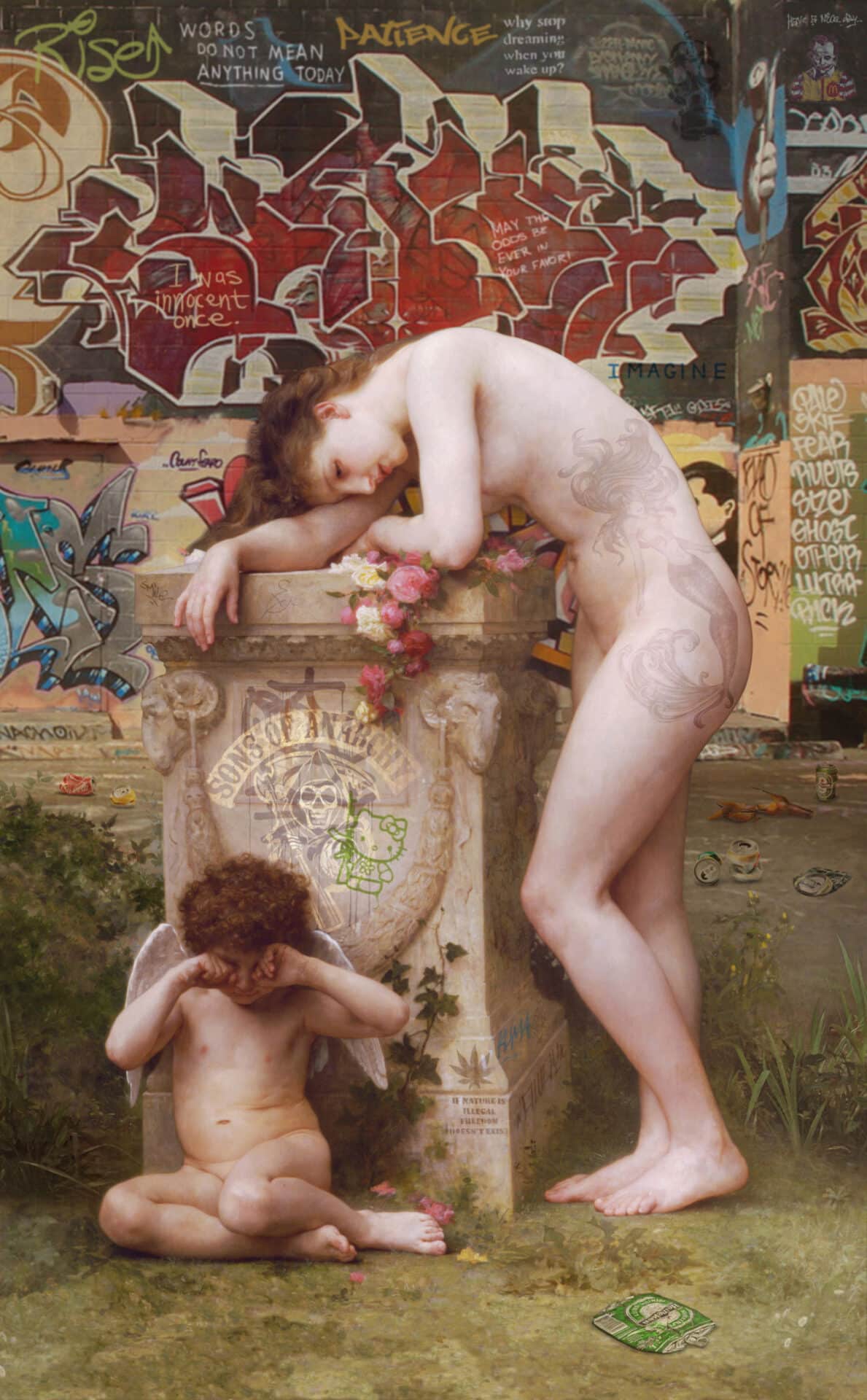 Why does this matter? Because art does not exist in isolation, there is a canon of art history, and it takes an artist like Marco Battaglini to connect the dots and draw a line between the great masters and what we see around us today, using motifs such as the marks of a graffiti artist, the tags, and the labels. We are presented with something that is simultaneously timeless yet up to date, and the effect is startling. We are drawn into an old world of classical virtues, of values which actually pre-dates Christianity, harking back to a Classical period and Roman and Greek mythology. But suddenly, they are transposed and transported into a contemporary context. This matters because art should move forward to be relevant. Battaglini achieves this by acknowledging the past, through his understanding of the classics and the great masters of the Renaissance in his own language. What he sees around him is the art of today, the urban art of Banksy and other stencil and spray artists.

There is humour in his work, along with a certain irony and playfulness. If you look closely at the work, you will see that the painted texts are jokes and witty comments. Battaglini’s art is challenging and thought-provoking. What is exciting about his work is this duality, this dialogue between the refined and delicate classical aesthetics and an edgy yet humorous take on the urban art genre.

Marco Battaglini’s visually delightful pieces will be showcased at ArtCatto Gallery, in Loulé, from June 28.