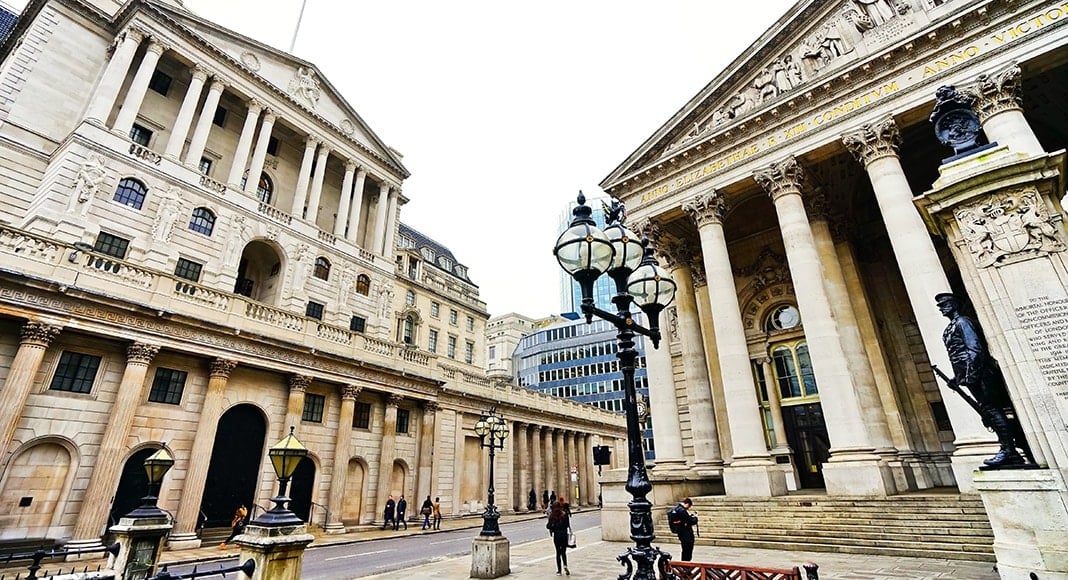 Yesterday saw the much-anticipated Bank of England’s August policy review. Markets expected the tone to be hawkish, and the central bank didn’t disappoint.

However, a lack of surprise headlines meant that the currency markets have stayed relatively stable.

Despite maintaining that interests will remain at 0.10% for the time being, the Bank of England has said that they plan a bank rate rise in the second two quarters of 2022.

Although this hasn’t set the pound-to-euro rate on fire, it has propped up and given further support to an already strengthening pound. As of Friday, GBP/EUR has seen peaks of 1.179, nearing 18-month highs.

Crucially, it now looks like the Bank of England is set to raise interest rates before several G10 central banks, including the U.S. Federal Reserve, the Reserve Bank of Australia and, indeed, the European Central Bank. In theory, this should prove to provide support for the value of GBP over the coming months.

Why the hawkish shift?
Central banks tighten monetary policy — or in other words, raise interest rates and slow quantitative easing — to tackle inflation. As the UK emerges from the remains of the global pandemic, people who have been able to save in lockdown have begun to spend their money, causing prices to rise.

In May, the inflation rate was anticipated to get to 3% in 2021. Now, it’s forecasted to hit 4%. The worrying prospect of the UK economy overheating has made it harder for the BoE to argue that inflation is ‘transitory’. And as such, the central bank has been pushed to tighten its monetary policy.

What’s more, the BoE plans to slow down its quantitative easing programme once the bank rate reaches 0.5%. The previous watermark was 1.5%. The suggestion that asset purchasing could cease sooner rather than later is another bullish message and could go further to strengthen the value of GBP.

But will the rate hike happen?
Despite the optimism, some experts expect the BoE to not go through with its pledge to raise interest rates in the second half of next year. The school of thought is that the UK economic recovery will slow down, disappointing the central bank’s expectations.

For example, ING forecasts growth of 1.5% in the third quarter of 2022, less than the 3% growth anticipated by the BoE.

If this is the case, some economists believe that the UK’s central bank will push back the interest rate hike to the middle of 2023, a year later than forecasted. This could weigh heavy on the value of GBP.

How has it affected the value of GBP?
Despite essentially following through with market expectations, GBP still felt a boost against major currencies. On Thursday, GBP/EUR pushed up 0.6%, while GBP/USD appreciated 0.3% before a correction on Friday.

What’s happening to the euro?
While the pound appreciates off the back of an optimistic tone, Europe experiences some economic disappointments.

German industrial production numbers for July were released on Friday and surprised the markets — in a negative way. Figures showed that the industrial output in the European manufacturing powerhouse dropped 1.3%, not the 0.5% increase that the markets were expecting.

This is the third month in a row German industrial figures have fallen. It’s posited that is down to supply chain issues, rather than the global pandemic. It’s a combination of the problems still arising from the Suez Canal blockage and the global shortage of semiconductors.

Experts are saying that this could be the ‘ketchup bottle’ effect. Remember when you’re shaking a ketchup bottle? Nothing comes out for each shake until it all is released at once.

It’s the same phenomenon here. Demand for the German industry is high — order books are filled. Once the supply issues are fixed and stop, we’re likely to see the flood of industrial output.

Despite being unexpected, the bad news doesn’t seem to have had a huge impact on the value of the euro. The EUR/USD rate remained stable at the time the data was released, trading at 1.1823. This could be because markets are expecting German industrial production numbers to pick up towards the end of the year.

We’re Privalgo — specialists in currency exchange. We are authorised by the Financial Conduct Authority (FCA) as an Electronic Money Institution. (Reference number: 900887)
We help Brits save money and time when they move to Portugal through leading exchange rates, zero hidden fees, and innovative solutions. Get in touch today to see how we can help you build a rewarding foreign exchange strategy.