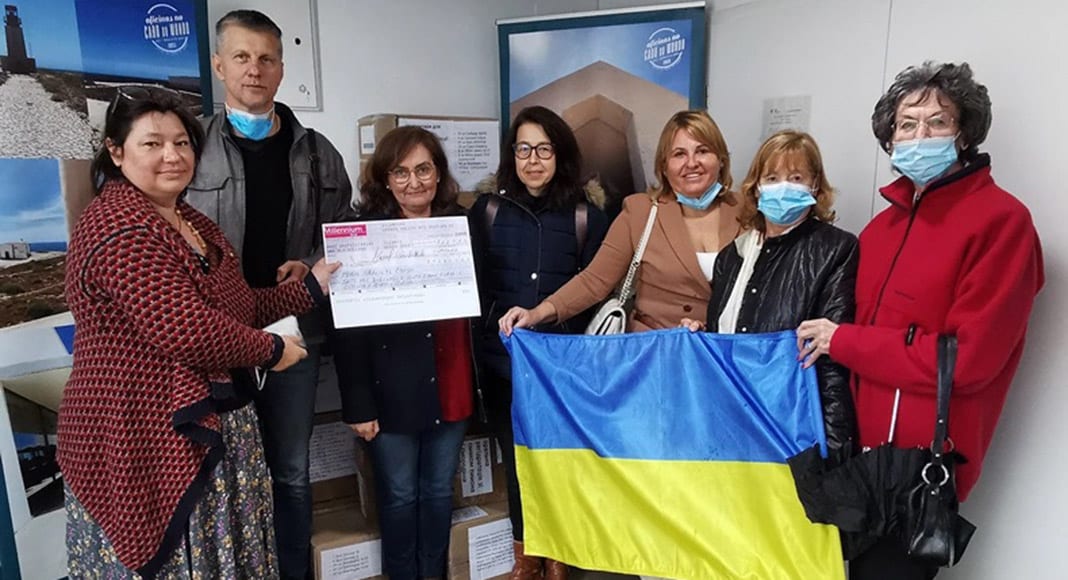 The Old Village Charity Committee have demonstrated their solidarity towards Ukraine by donating more than €7,000 towards the purchasing of medicines and hospital supplies to help victims of the conflict in Ukraine.

This initiative was carried out with the collaboration of Ukrainian doctors working in Portuguese hospitals and with the help of Farmácia Algarve in Quarteira.

The Old Village Charity Committee, represented by Célia Mendes, Pam Foster and Pat Mady, delivered 16 boxes filled with medicines and medical equipment to the Quarteira parish council where Dr. Andriy Krystopchuk (Ukrainian Doctor intern at Faro Hospital), along with a volunteer from Associação Doina and representative from Farmácia Algarve in Quarteira were present.

Célia Mendes explained that The Old Village Charity Committee was initiated with the purpose of providing support to charities in the Municipality of Loulé and said it was gratifying to be associated with this project.

Funds raised by the Charity Committee resulted from donations made by around 50% of Old Village Owners. During the first three years, the funds raised were given annually to the Associação Akredita em Ti, located in the Abelheira area of Quarteira.

However, due to the pandemic and restrictive measures, it had proved impossible to meet and make decisions on the distribution of funds raised.

Following a Committee meeting, it was decided that funds accumulated during the last three years would be used to purchase medicine and hospital supplies for the conflict in Ukraine.

The transport of this medical equipment will be carried out by a private company under the guidance of Dr. Andriy Krystopchuk who was born in Lviv. A hospital association in Lviv, which comprises of a group of four military hospitals, will receive the goods.

“The Committee thanks the Old Village Owners and other parties involved who made this donation possible. Our thoughts are with this country in turmoil, and we pray for the restoration of peace,” say organisers.