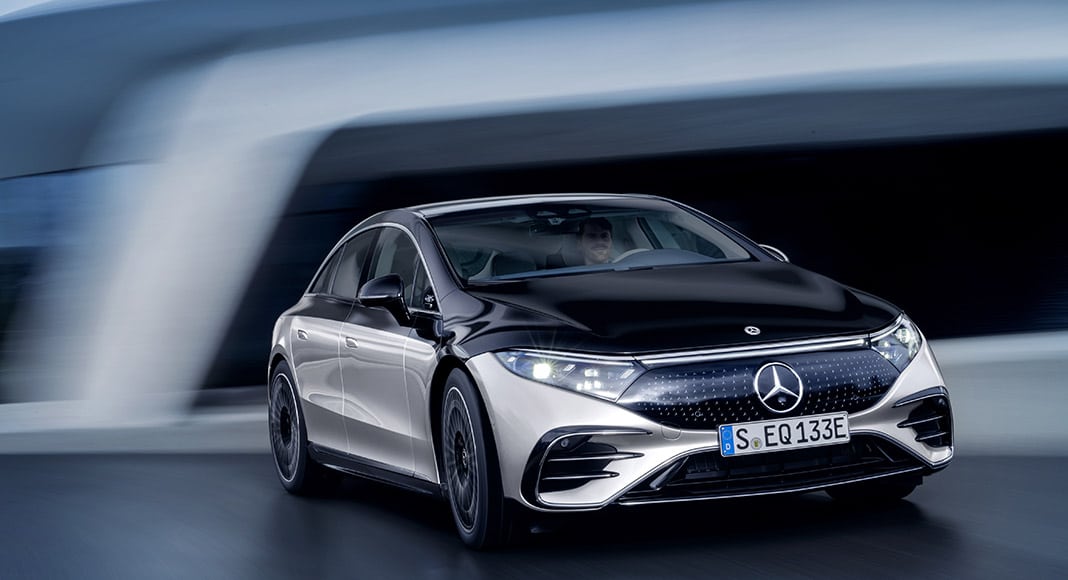 The EQS wants to be the world’s best electric vehicle, but it has an even harder task: to rival Mercedes’ own S-Class.

The new Mercedes EQS is quite a complex car from every possible perspective. Very, very complex. Two weeks after I drove it, I am still trying to decipher it properly.

Put simply, the EQS is Mercedes’ first attempt at creating the world’s best electric car. But there is nothing simple about that. The German outfit has been building the car that is widely recognised as the best car in the world for nearly 70 years, the S-Class gaining an unparalleled reputation that had a lot to do with Mercedes’ own status as a constructor of high-end vehicles.

The problem, if we can call it so, is that Mercedes have been continuously improving the S-Class for seven decades, whereas the EQS is a ground-up project. Now, in an industry where history, tradition and pedigree carry a lot of weight, trying to build a car that must combine those and still be disruptive enough to be relevant is no mean feat. 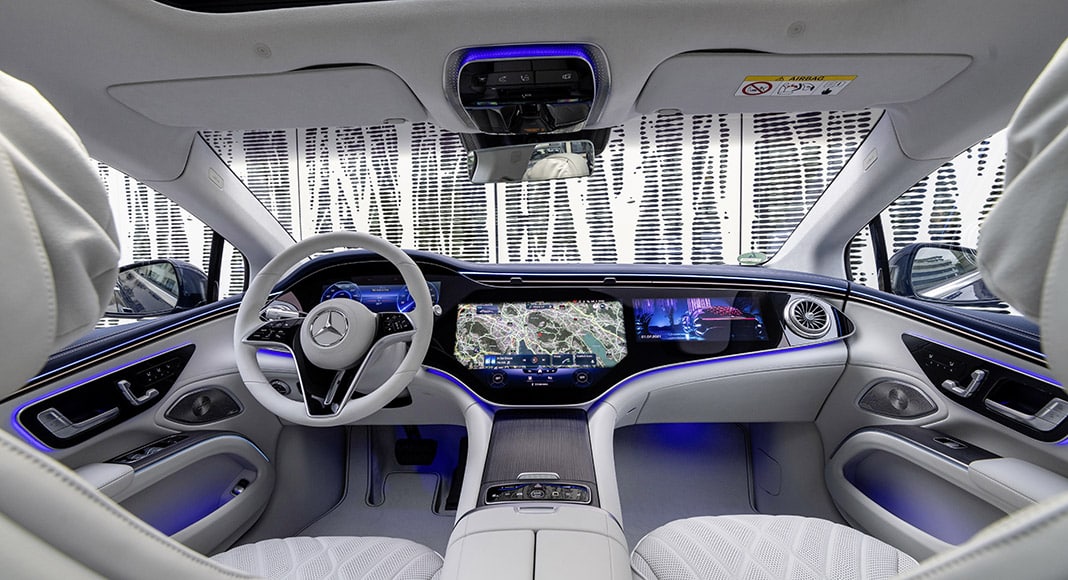 The EQ line of models was the way Mercedes decided it would follow in order to create a clear distinction between their standard combustion-engined cars and the new, all electric offerings. EQ is a letter play with IQ, meaning the EQ products are technologically advanced.

The EQ catalogue will keep on expanding over the next decade, but for now we have the entry-level EQA SUV, the seven-seat EQB SUV, the EQC SUV, the pioneer of pure electric vehicles for Mercedes back in 2019, the EQS saloon, the EQV people carrier and the EQE saloon is just around the corner.

The EQS is the first EQ built on a dedicated EV platform. Trying to distance itself from the S-Class meant it had to be different in more than just the way it propels itself. Thus, the EQS has its own personality and, despite being a saloon, the body design revolves around a liftback style layout, which is kind of a hatchback in a saloon body, with a cab-forward profile which isn’t what the market associates with the brand at all.

The grille has been replaced by a black panel and the headlights are linked by a slim light bar, a recurrent theme on all EQ models. Frameless doors are a nice touch, as is the option of a two-colour paint scheme, elevating the image of the EQS a step above its rivals and letting it loose to search clients that would usually look at something like a Bentley or a Rolls-Royce.

At 5215mm long, 1926mm wide and 1512mm tall, the EQS is huge. The wheelbase alone is 3210mm long, leaving a lot of space between the axles for an airy cabin. Incredibly, the EQS has set a world record for the most aerodynamic efficient series production vehicle ever, boasting a drag coefficient of just 0.20Cd. 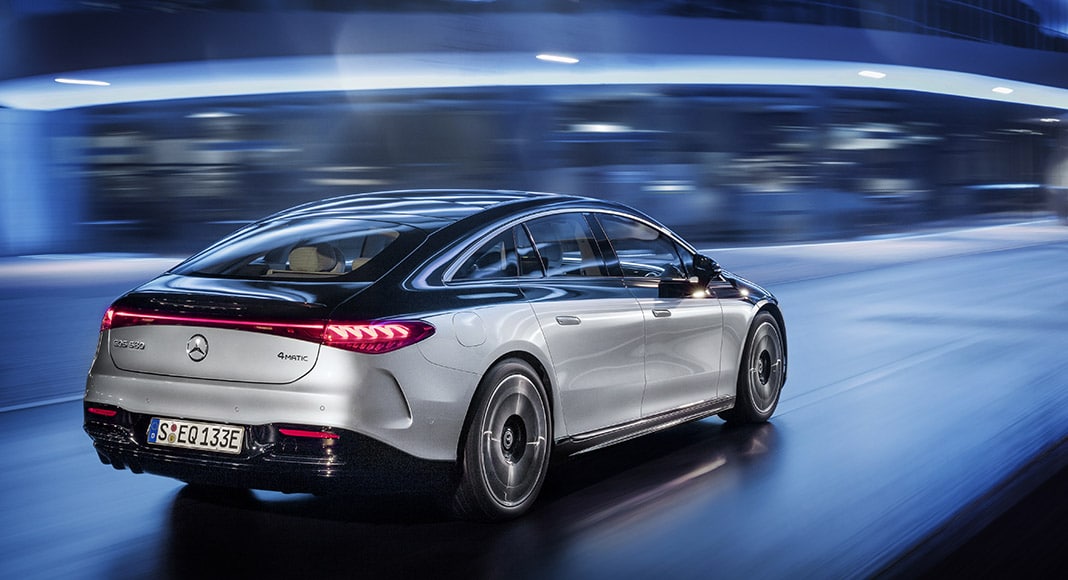 Two versions are available at launch, the 450+ – one motor developing 333 horsepower to the rear wheels and up to 728km of range – and the four-wheel drive 580+, producing 523 horsepower from two motors and with a maximum range of 685km. They share the same 107.8kWh battery pack.

I drove the EQS 580+ and it blew me away in terms of refinement, depth of engineering, comfort and a constant feeling of being at the wheel of the future of the automobile.

Performance is gobsmacking, with 0-100km dealt within 4.3 seconds, while the dynamic abilities of this 2510kg car are truly astonishing. Still, the interior is the standout element in a sea of standout elements.

The cabin is dominated by a thing called Hyperscreen, a one-piece curved display that fills the whole of the dashboard, housing three digital screens: one for the front passenger, one for the infotainment in the middle, and one for the dials. In total, the Hyperscreen stretches for 1.41m across the dashboard, automatically adjusting its brightness according to light conditions.

The latest iteration of Mercedes’ MBUX system is better than ever, including over-the-air updates, augmented reality functions for the head-up display and sat-nav and a new subscription-based service available through the Mercedes Me app.

Objectively, the Hyperscreen shows how far screen technology can go in a car, because the truth is most of the functions it houses cannot (or should not) be used during driving. It’s just plain dangerous. However, use it as the technological marvel that it is and all other car infotainment systems seem, well, outdated. Even if you don’t use all of it all the time, it just feels good to know you can.

Front seats are magnificent, with up to 19 adjustment motors and 10 massage programmes, whereas the rear can be had in a two-chair or three-seat bench configuration.

The liftback body has the advantage of offering 60 litres more boot space than the S-Class.

When you drive around in an electric car which starts at just under €150,000, you cannot help but wonder if you are driving something all of us, one way or another, sooner or later, will be driving in the near future. This is what an electric car will be. And it is amazing. Truly, truly impressive, believe me. Well done, Mercedes. I worry only about the fact that I never, for one second, thought I would prefer one over an S-Class.