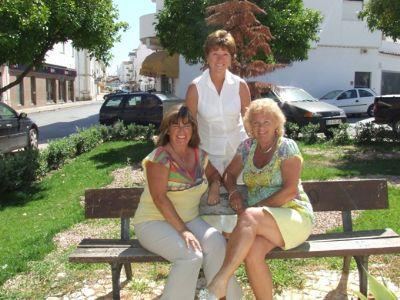 A group of golfing friends is to recreate the calendar famously featured in the film Calendar Girls to raise money for a trust fund in memory of a British officer killed in Afghanistan.

The British expatriates will be disrobing and strategically placing their golf clubs, on secret golf course locations in the Algarve, in aid of the Captain James Philippson Trust Fund.

The 10th anniversary of the original calendar is approaching and the idea to recreate it came to Lyn Cook (Miss June).

Her friend, Trish Quinlan, is the mother of Captain James Philippson, J the first British soldier to lose his life in the Helmand region of Afghanistan in 2006.

The idea to set up a trust fund in honour of James was thought of when friends and family sat together sharing memories of him shortly after his death.

“We wanted to make something positive out of something so dreadful. It was a way of coping,” said Trish Quinlan.

Lots of activities have taken place to raise money for the trust, including the running of marathons, bungee jumps, charity walks and golfing events.

“As James was so adventurous and sporty, it’s fitting to do something physical to raise money for the trust,” said Trish.

The calendar initiative may be a less physical affair but has all the women feeling rather nervous.

“We are counting on lots of help from Photoshop!” said Lyn.

Lyn’s daughter, Nicky Cook, is a professional photographer and will be taking the photos of the group of glamorous golfers.

“James would have loved the idea for the calendar. He had a great sense of humour,” said Trish Quinlan.

Money raised in aid of the trust goes to beneficiaries and charities that were close to James’ heart. The money raised by the calendar will go to Macmillan Nurses, Help for Heroes and to the Faro cancer unit.

“English calendars are very scarce in the Algarve so we hope there will be a lot of interest,” said Lyn Cook.

Trish Quinlan has lived in the Algarve for four years and James visited his family for Mother’s Day two weeks before he left for Afghanistan. “We took him to the west coast as he loved to surf and scuba dive,” said Trish.

Before joining the army, James studied at Plymouth University and then travelled around the world for a year. He was always very active and always lived life to the full. A motto that he lived by was “Live life, it’s not a rehearsal.”

James was accepted into Sandhurst, where he won many awards including the Queen’s colours and an award for artillery.

He served in Iraq before the invasion and then went on to serve in Afghanistan with the United Nations Peace Keeping.

James was killed in action on June 11, 2006 when he was part of a rapid reaction unit called out to help an injured comrade whose patrol had been ambushed and was under heavy attack.

Other fundraising events for the trust include a golfing tournament where 120 golfers will take part on August 29 at Gramacho golf club.

The event will be followed by dinner at Poço Partido in Carvoeiro and then a scrabble contest.

There will also be an auction and raffle and any donations by readers would be gratefully received by Trish.

To contact Trish Quinlan, please telephone 282 381 469 or email her at stevetrishquinlan@msn.com For more information about the trust, visit the Captain James Philippson Trust Fund website: www.captainjim.org