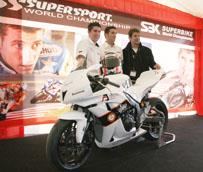 AS THE new World Supersport Championship motorbike racing season begins next week, The Resident speaks exclusively to the manager of the Anglo-Luso partnership of the Parkalgar Honda team, Simon Buckmaster.

The new racing track at Mexilhoeira Grande, in Portimão, is due to host the final round of this season’s World Supersport Championship, which is running side-by-side with the World Superbike Championship, on November 2, as its inaugural event and the pressure is on for the Parkalgar Honda home team, composed of British rider Craig Jones and Portuguese rider Miguel Praia.

In 2007, Craig Jones finished fifth in the World Supersport Championship, and this season he has teamed up with Miguel Praia.

The first race takes place on February 23, in Qatar.

“We have improved but you never know when the lights go green,” said Simon Buckmaster. “You have to be confident that you have done your best.”

As the team manager, Simon is responsible for the riders, overseeing the mechanics and logistics, and organising the deals, while performing several other functions.

The Parkalgar Honda team has ambitious goals and Simon told The Resident that it would be incredible if Craig Jones won the world championship. “We have a good basis from last year, with Craig finishing

fifth overall” and “we have improved the bikes”, said the manager.

The British rider set a new track record at the qualifying stages in Spain a few weeks ago and Simon believes he has what it takes to win the championship. “Miguel has shown true potential as he was only one second behind Craig. It would be great to see him in the top 10,” Simon said.

With 14 races over the nine month season, the highlight will be the final race at their home ground at Portimão’s future racing track. Simon said: “It’s a fantastic venue and 10km from the beach so it’s great for fans coming from abroad.”

up in the Algarve. “It is a great thing for fans and also for local residents,” said Simon, who believes that the track itself is “challenging” with great, fast and slower sections.

With high hopes of a successful season, Simon Buckmaster is already looking to the future. “I would like to see us in the Superbikes Championship in 2009” but this is dependent on the 2008 season and who is crowned in Portimão on November 2.

The event was also attended by the Secretary of State for Sport and Youth, Laurentino Dias, as well as local official entities and dozens of guests and media representatives. The Algarve Motor Park (see The Resident edition of February 1), is located in Sítio do Escampadinho, in Mexilhoeira Grande, and is scheduled to be ready by November 2, for its first international competition.