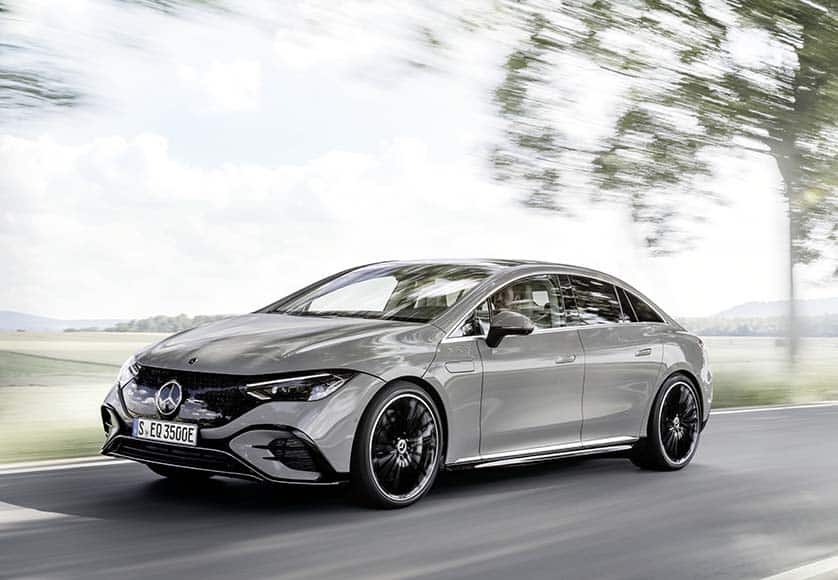 The world’s oldest car maker is looking for a new voice now the electric car is a certainty. I hear what the EQE has to say – I am just not sure it is progress.

The Mercedes EQE is the three-pointed star brand’s second foray into electric saloon territory after the top-of-the-line EQS.

If you like the way the EQS looks, then the same will be true of the EQE, because Mercedes have adopted the photocopier approach and just scaled down the design of the EQS to create the EQE.

I understand the EQ is a new sub-brand within the Mercedes empire and that a visual language needs to be established from the ground up, but it just seems like a missed opportunity in terms of being bold and giving the EQE its own personality.

Anyway, although the EQE sits beneath the EQs in the range, it still starts at almost €75,000, which means this is yet another electric car that most definitely will not change the landscape of our roads – it’s a rich man’s toy as are all the best EVs. I am sure no one will buy it because they want to be at the forefront of the climate change fight. And let’s not even delve into the fact that electric cars may save a planet one day, but not the one we live in. 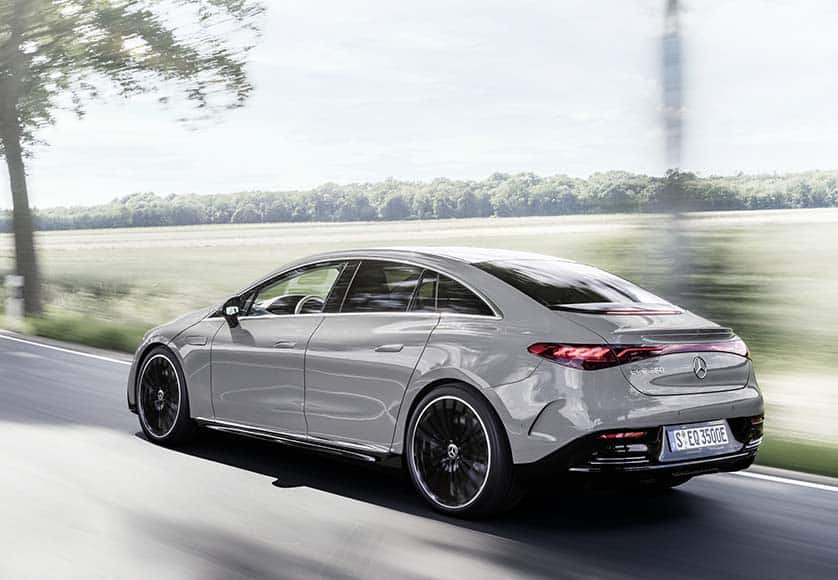 I tested the 350+ version, starting at €73,800 (the one I drove was €105,700). First things first: this car is a sea of tranquillity. It’s not just a Mercedes, which is a very good place to start with for someone looking for a sea of tranquillity, it is an electric Mercedes. Nothing can upset this car. It’s so quiet, so comfortable, so capable of acting like a gliding capsule, it really captures your admiration. Blame the optional Airmatic air suspension I guess, but also an incredible work done in terms of acoustic isolation.

The EQE uses a version of the same EVA2 car architecture that the EQS pioneered, only with a wheelbase that is 90mm shorter. The drive battery modules are good for 90kWh of usable capacity, rather than the 108kWh seen on the EQS.

The 292-horsepower drive motor – mounted on the back of the car – has more than enough performance to propel the EQE to 100km/h in 6.4 seconds and on to a top speed of 210 km/h. The driver, however, will be more concerned about actually getting to where he is going than getting there as fast as possible.

Speaking of range, Mercedes claims the EQE 350+ can go up to 654km on a single charge and I must confess I can see it doing 600km. But – and this is one of those big buts – you really have to drive very, very slowly. It really doesn’t feel like progress when cyclists are going almost as fast as cars does it? 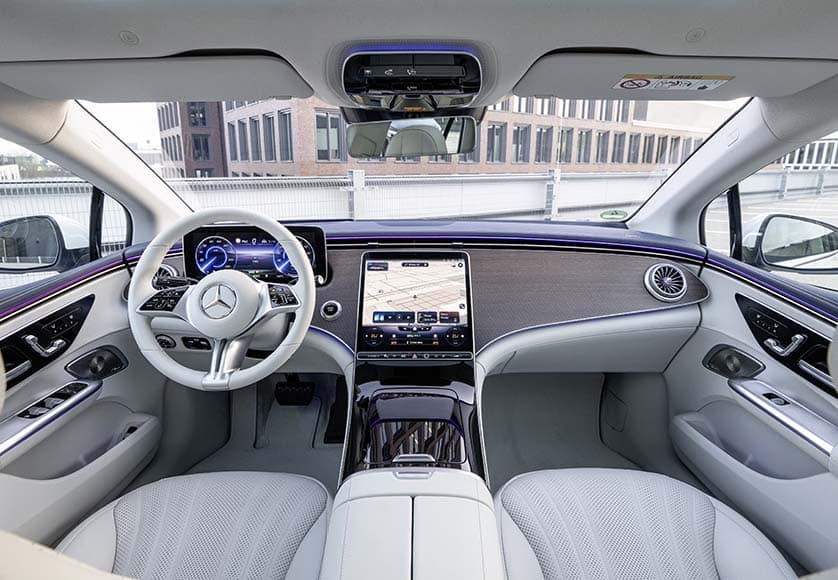 Obviously, this being a product for techies and not for petrolheads, the EQE is big on technology. The MBUX Hyperscreen of the EQS is only available on the EQE 500 and EQE 53 AMG version, but the standard infotainment is – dare I say it – better fit for purpose. I really don’t think a car should have a 1410mm wide screen in front of the driver. The 12.8’’ screen ‘my’ car had probably already incorporated more features than the Space Shuttle and you could tell it to find the Arch of the Covenant and it would.

The electric car is more a big computer, less a driving machine, so it is no surprise that the actual computer screen is getting more and more advanced, whereas the driving gets more and more boring. “Ah,” you say, “Mercedes have built a boring car.” Well, yes and no.

The whole concept of the electric car can never be as fun as a combustion car, no matter how fast an EV can get to 100km/h. This is not Mercedes’ fault. A microwave cooks food faster than a barbecue, but did you ever wish for a microwave-heated burger? Me neither.

So, what to make of the EQE? Objectively, it’s a great machine. High-quality, long range, strong performance and at the cutting-edge of car and infotainment technology. People (with the necessary means, of course) making the transition from ICE to EV will love it.

The guys from Stuttgart have done a very good job. And that’s it. There is no passion here, as there is no passion in all electric competitors to this model. I drove a BMW i4 M50 after the EQE and it stirred my soul as much as my blender does. Same goes for the Tesla Model S and countless other EVs.

I am not sure I will be writing about new cars in two or three years. They will all feel the same. Maybe I can convince the editor to create a youngtimers and classic cars page here in the Resident. Test-driving a Mercedes 280 SL Pagoda from 1967 running on synthetic fuel – now that is a great day at the office. 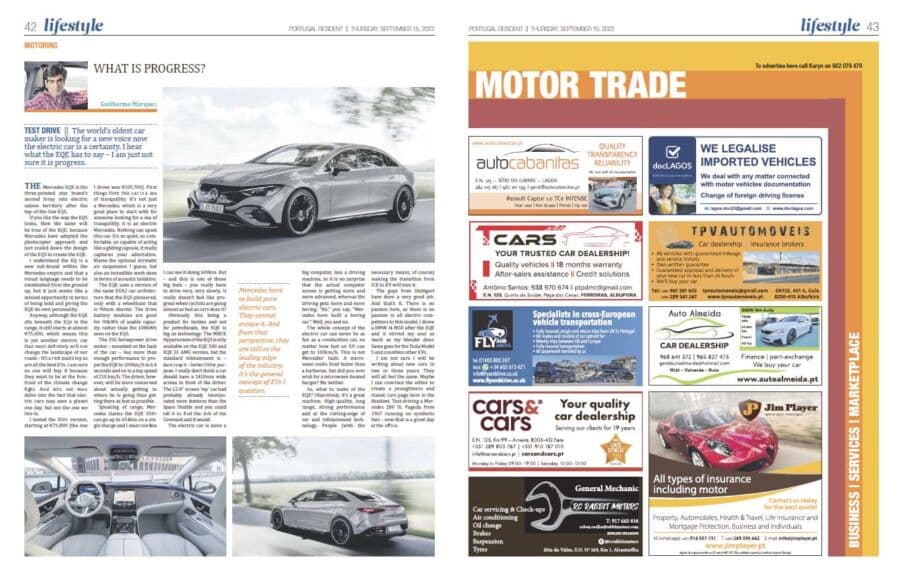