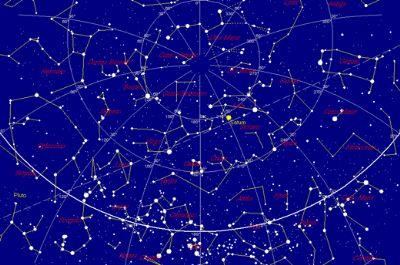 On the third of the month, the just after quarter Moon is close to the planet Saturn, this is a convenient pointer as Saturn is not very bright at the moment and just appears as an ordinary yellowish ‘star’ in the constellation of Leo.

From the fourth to the sixth the Eta-Aquarid Meteor shower will occur. This is a shower of ‘shooting stars’ that has been known about for many years; in fact the Chinese astronomers first recorded this in 401 A.D.  The dust given off from a comet on its orbit around the Sun causes this shower, as well as many others. The particular comet involved in the Eta-Aquarid is the well-known Halley’s Comet. This comet will not return now for many years but its dust is spread all around its orbit and causes the meteors every year at the same time.

Well after midnight in the constellation of Capricorn, the giant planet Jupiter rises and, on the morning of the 17th the last quarter crescent Moon is close to the planet.

In the early evening in May, when the planet Saturn is high in the South, anyone looking towards the southern horizon can see the constellation of Centaurus, this constellation contains Alpha Centauri, the closest star to our solar system. This star is just below the horizon from southern Portugal, but if you travelled to the Canary Islands, this star, and also the constellation of the Southern Cross, would then be visible. 2000 years ago these objects would have been seen from the Algarve but the direction of the Earth’s axis is slowly altering over a 26,000 year period and we now have a slightly different view of the heavens than in the distant past.