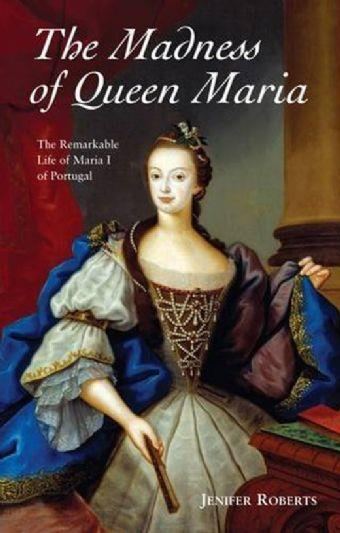 The first biography in English of Maria I of Portugal and the turbulent times through which she lived will be published by Templeton Press on July 31.

In this gripping biography – which reads like a novel – the dramatic events of Maria’s life are seen through the eyes of a vulnerable woman unsuited for monarchy: the earthquake which destroyed Lisbon a few weeks before her 21st birthday; the tyranny of her father’s first minister, the Marquis of Pombal; her fifteen years as reigning monarch; the madness inherited from her Spanish grandfather; her treatment at the hands of Dr Francis Willis; her last-minute flight across the Atlantic as a French invasion force marched into Lisbon.

From her birth in 1734 in the most opulent city in Europe, to her death in 1816 in much humbler surroundings in Brazil, The Madness of Queen Maria puts flesh on the bones of a woman whose story is a graphic example of the 18th Century battle between church and state, between the old superstitions and the age of reason. Maria embodied these contradictions. Pulled by her instincts towards the old religion, she understood at least some aspects of the Enlightenment and took a humanitarian approach to state affairs – abolishing the death penalty and declaring that she would abandon the throne rather than go to war.

She did her best to rule the country with the advice of her ministers, but she was uneducated in state affairs and had little interest in politics. The Madness of Queen Maria is therefore not a political history. Instead, the book concentrates on the difficulties in Maria’s private life, as well as on the major events and personalities of her era.

In the summer of 1788, the Queen spent three days in the house of a low-born English industrialist, William Stephens, at his glass factory in central Portugal. A few days later, Stephens’s sister wrote a detailed account of this unique event in royal history, a letter which the author discovered in a county record office amongst the papers of a provincial solicitor. Transcribed in full as an appendix, the letter provides an intimate glimpse into the world of absolute monarchy – a snapshot of court life in the old Europe – just one year before the French Revolution began to change the face of the continent.

The letter also gives a sympathetic portrait of Maria I during her last few weeks of happiness, before she suffered the string of tragedies that would trigger the onset of insanity and the unfortunate name of Maria A Louca, Maria the Mad.  Jenifer Roberts is the author of GLASS: The Strange History of the Stephens Fortune, published a few years ago.