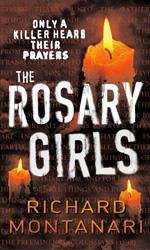 WE KNOW there are many fans of serial-killer thrillers out there, so here we recommend you keep an eye out for The Rosary Girls by Richard Montanari. Coming out in paperback this month at 11 euros, this novel introduces Philadelphia homicide police detectives Kevin Byrne and Jessica Balzano.

Montanari has written some interesting, even riveting novels that peel back the dark and sordid side of the human psyche. But nothing he has previously produced will prepare you for The Rosary Girls.

In the most brutal killing crusade Philadelphia has seen in years, a series of young Catholic women are found dead, their bodies mutilated and their hands bolted together. Each clutching a rosary in her lifeless grasp. The cops are trying to figure out what the common element is that links these particular girls, and veteran cop Byrne and his rookie partner Balzano set out to hunt down the elusive killer, who leads them deeper and deeper into the abyss of a mad man’s depravity.

Byrne has a high rate of solved cases – that is, after all, what he’s supposed to do. However, as we quickly learn at the beginning of the novel, his methods are perhaps a bit suspect – in other words, he’s effective. Suspects appear before him like bad dreams – and vanish just as quickly. While the body count rises, Easter is fast approaching – the day of resurrection and of the last rosary to be counted …

The world that Montanari paints is frightening, but it is also a world where a cop like Byrne is badly needed. Byrne and Balzano are tough and tender, with their methods complementing each other rather than clashing. The result is a thoroughly engrossing work that is driven by plot, character development and an edge-of-your-seat denouement. Not a book for the faint-of-heart.

Moving on to a completely different style of writing, Margaret Forster’s latest to come out in paperback (also 11 euros) is called Is There Anything You Want?

What do Mrs H., Rachel, Edwina, Ida, Sarah, Dot and Chrissie have in common? They’re all women, but they’re fat, thin, old, young, professional and incompetent – appearing as diverse as human nature can be. However, they are all survivors.

This compelling novel follows the ripples that go out into ordinary lives, women’s lives in particular, which have been scarred and changed by a shared experience, all connected by the same hospital clinic in a small northern town.

This is a novel about what it means to live in the shadow of disease and with its scars, whether mental or physical, looking back over one’s shoulder while trying to go forward. You can trip up or, if you’re careful, you might make it …

At its heart is a strong, difficult, but finally vulnerable, old woman. Mrs H. is generous and helpful to a (sometimes comical) fault, and lives alone with a secret that she tells no one but that finally explains everything. Her niece is a young doctor who can’t take the strain and who wants something different from life.

Alongside them are the other walking wounded, getting on with their lives: Ida, once beautiful and now hiding her scars under layers of fat; tiny Dot who is stronger than she seems; Edwina, a mother who lives vicariously through others, even her wild daughter Rachel, who finds almost too late what it’s like to soar above the crowd. The men in their lives take a secondary role, but are an important part of the whole structure.

There can be few other contemporary authors who have evoked middle England with greater accuracy. Her characters are bursting with desires that they can never quite voice and that no one else guesses. Roots are Forster’s forte. Her characters are not mere products of their time and place, but they are under constant, cruel pressure to act as if they are. Forster is often concerned with mothers and daughters, and with the tensions suffered by women who feel a duty to their families, while also longing for independence. But, no two stories are the same and each new permutation offers insights never signalled in its predecessors.