Welcome to the June night sky. This is the month of the summer solstice when our sun will pass at its highest point in the daytime sky in the northern hemisphere.

Conversely in the southern hemisphere, the exact opposite is true. So, this will be our midsummer day and, south of the equator, it will be midwinter day.

For those of you who get up early and are out and about before sunrise, you can see, over in the east and low down, five planets all in a line. Starting with the faintest and lowest to the horizon, we have Mercury, the closest planet to the sun. We then have brilliant Venus about a hand width to the right of Mercury.

Following on and upwards, we will reach Mars and Jupiter seen close together, with Mars being a dull red hue and much fainter than the yellowish Jupiter.

Finally, if you extend the imaginary line along, you will reach a starlike object not quite as bright as Jupiter. This will be the ringed planet Saturn and it will have a slightly creamy yellow hue. Through a small telescope, its famous rings will be seen along with possibly Titan, its largest moon. Titan is, in fact, larger than the planet Mercury and has dense atmosphere hiding its cold surface.

This year, we have three supermoons. These happen when the full Moon occupies the point in its orbit that is closest to the Earth. The first will be on June 14, and then July 13 and finally August 12. This last supermoon will be on the night of a major meteor shower and the Moon can be up to 30% brighter than the usual full Moon, so some of the faintest shooting stars would not be seen.

Looking towards the south, during June evenings, the first of the summer constellations begin to be visible. Low down, we have Scorpius containing the red supergiant star Antares (meaning rival of Mars) and, on the southeastern horizon, Sagittarius the Archer is rising. This whole area is towards the centre of our own Galaxy and this starfield contains hundreds of millions of faint distant stars.

Overhead on June evenings, if you follow the Milky Way upwards, the summer triangle comes into view with its three bright stars, Vega, Deneb, and Altair. The Milky Way is the inside view of one of its spiral arms and it is a star-forming region with bright young stars mixed in with dust and gas. The greatest chance of finding an Earth-like planet orbiting a Sun-like star statistically would be in areas of the sky like this and this discovery would most likely be made with infrared light using an instrument such as the James Webb telescope that is close to being fully operational in the coming weeks.

Clive Jackson is the director of the Camera Obscura attraction (next to the Castle in Tavira), specialising in education and public outreach.
281 322 527 | info@torredetavira.com www.torredetavira.com 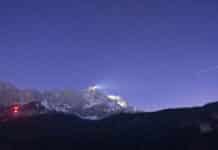