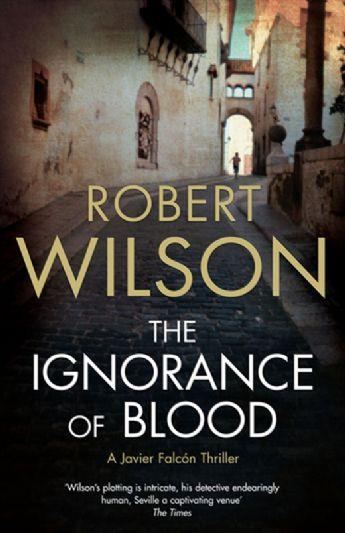 In the wake of a terrorist attack on Seville, Inspector Jefe Javier Falcón is determined to fulfil his promise to its citizens – that he will bring the real perpetrators to justice. The violent death of a gangster provides evidence implicating the Russian mafia in the outrage, but pitches Falcón straight into the heart of a turf war over prostitution and drugs.

In The Ignorance of Blood, Wilson combines a gripping and detailed police investigation with a fascinating examination of the impact of history on modern Spanish life.  If you have followed Robert Wilson’s Blind Man of Seville series, you won’t be able to put this down as the exposé of a Spanish underworld takes us deeper into a mire of body trafficking, child prostitution, drugs and money-laundering and into the psyche of a man whose recent emotional awakening gives these murky criminal figures a strong hold over him.

The Ignorance of Blood would normally only be available in hardcover at 22 euros but the Griffin Bookshop has the ‘airport’ paperback edition at just 13 euros.  If you would like to reserve your copy for Robert’s booksigning at the Griffin Bookshop on Monday 4th May between 2:30 pm and 4.30 pm, ring 289 393904 or email griffin@mail.telepac.pt