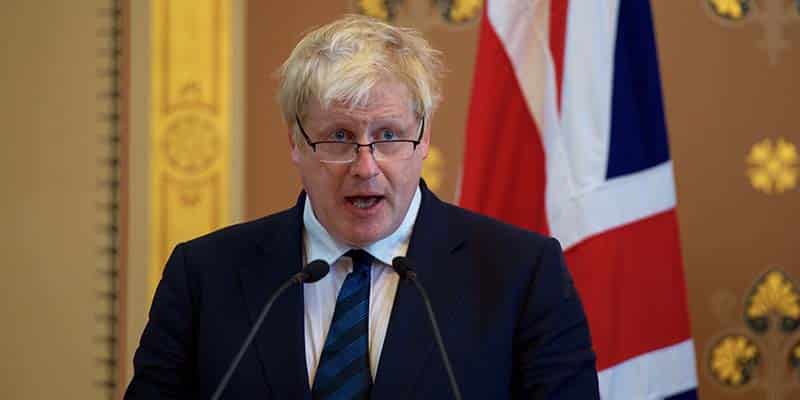 Welcome to summer, or the ‘silly season’ as this time of year is known in certain quarters. The Algarve is bracing itself for its annual holiday invasion while Donald Trump threatens to obliterate Iran, and back home in Britain the public eye is attempting to focus on Wimbledon and the final stages of the Cricket World Cup as Conservative politicians continue squabbling over their vainglorious leadership contest – light reading for the uninitiated!

I promise I won’t use the ‘B’ word, but Boris Johnson’s oldest daughter, Lara, now 26, did call her father a “selfish bastard”. Yes, Alexander Boris de Pfeffel Johnson, heir apparent to Theresa May’s now vacated and much tarnished party throne, and shoo-in to become the country’s new first citizen as the second successive Prime Minister not to face the electorate’s approval – or is he?

Born on Manhattan’s Upper East Side in New York to British upper middle-class academics 55 years ago, ‘BoJo’, or ‘bonking Boris’ as I prefer to call him, enjoyed a privileged upbringing in the rural English countryside and Brussels before attending Eton and Oxford.

A contemporary of David Cameron and current leadership rival Jeremy Hunt, he presided over the university’s Union while reading Classics before going on to work as a journalist. Sacked by the Times for falsifying a quotation, he then rose to the post of Assistant Editor with the Daily Telegraph and edited The Spectator before entering politics in 2001 as MP for (hooray) Henley.

Another ‘sacking’ later, this time relieving him from his duties as shadow Arts Minister for publicly lying about his sexual exploits, Johnson went on to serve an eight-year stint as Mayor of London and then returned to parliament, most recently resigning his foreign ministry portfolio in order to plot his resurrection on the backbenches.

Boris’s personal life can be described as ‘colourful’ at best, although terms such as ‘womaniser’ and ‘philanderer’ used by others may be more accurate. He first married aristocratic Oxford sweetheart Allegra Mostyn-Owen in 1987, but that union was dissolved six years later after his then affair with second wife-to-be Marina Wheeler became public knowledge.

Five extramarital flings, two pregnant mistresses, an abortion and a miscarriage later, variously dismissed as “an inverted pyramid of piffle” by the modern-day Casanova himself, long-suffering Marina had had enough and divorce proceedings were initiated last September.

In the meantime, Boris has taken up with 31-year-old Carrie Symonds, with whom he shares his South London flat. Two weeks ago, the police were called by neighbours after an apparent row between the lovebirds threatened to spill out into the street – I wonder what Milo, Cassia Peaches, Theodore Apollo and the aforementioned Lara, all children from his previous marriage, never mind staunchly blue Middle England, made of that. Despite Boris’s obvious popularity with the ladies, it is hard to swallow that this person will, in all probability, represent the once Great Britain by the end of summer.

“My chances of being PM are about as good as the chances of finding Elvis on Mars; or being reincarnated as an olive” was once his own self-depreciating assessment of reaching the political pinnacle. Past public gaffes such as describing black people as “piccaninnies” with “watermelon smiles” in print or burka-wearing Muslim women as “post boxes” should not have helped his fortunes, and yet here he is, still standing, larger than life.

In conclusion to my brief synopsis of who Boris is, a ‘job reference’ from respected former Telegraph editor-in-chief and boss Max Hastings: “Boris is a gold medal egomaniac – his chaotic public persona is not an act, he is manically disorganised about everything except his own image management. He is also a far more ruthless, and frankly nastier, figure than the public appreciates. I would not take Boris’s word about whether it is Monday or Tuesday, he is not a man to believe in, to trust or respect, save as a superlative exhibitionist. He is bereft of judgement, loyalty and discretion.”

But who is there to stop him? His Machiavellian backstage manoeuvres have already disposed of the likes of former campaign manager-turned-nemesis Michael Gove, humble Home Secretary Sajid Javid and largely unheard-of Rory Stewart during the internal leadership contest, leaving only former Health Secretary and Boris successor at the Foreign Office, Jeremy Hunt, to stand in his way.

A choirboy in comparison to his illustrious opponent, 52-year-old Jeremy Richard Streynsham Hunt is the son of Admiral Sir Nicholas Hunt and has been no stranger to the corridors of power himself. Educated at Eton rival Charterhouse, where he excelled at cross-country running while heading up the school’s magic society – he will need plenty of that – Mr Hunt went on to gain a first class degree in Politics, Philosophy and Economics at Oxford before taking up a teaching post in Japan.

Putting that experience to good use, he then proved his entrepreneurial skills publishing maps of London in Japanese and foreign student guides – the sale of that company netted him £15 million, reportedly turning him into the richest Member of Parliament, to which he had been elected in 2005.

He is happily married to Lucia Guo and has three children, previously stating that becoming Prime Minister is “incredibly unlikely – if you go into politics with a plan, the chances are you’ll come a cropper”.

Given Boris Johnson’s overwhelming lead amongst Conservative voters at the time of writing, Jeremy Hunt’s chances of gaining the party leadership and the nation’s top job that currently goes with it, are indeed minimal.

That only leaves ‘the other Jeremy’, Corbyn, to oppose clown prince Boris should a general election be called anytime in the near future – and that is already seen as a forgone conclusion by many.

The Labour leader, now in his 70th year, is very much in the mould of old-style dye-in-the-wool socialist predecessors Michael Foot and Tony Benn, enjoying popularity with hard core Unionists and the more extremist fringes of the movement. His credibility as a national figurehead further suffered in recent times as the party has become embroiled in accusations of anti-Semitism fuelled by strong pro-Arab leanings, something which has increasingly alienated middle-of-the-road labour voters and Jewish support.

In short, British politics have gone to pot and I didn’t even mention Nigel Farage.

Here in the Algarve, most of us are afforded the luxury of observing from a distance, able to take ‘the higher ground’ while basking in the sunshine of Europe’s south-wester-most corner.

Of course Portugal has its own problems … doctors and nurses, teachers and tanker drivers take it in turn to engage in industrial action, taxes, direct and indirect, are still on the rise as the country struggles to overcome its financial difficulties and Ronaldo misses the occasional penalty for the national football team. But, as a whole, that all pales into insignificance when compared to the farcical Punch and Judy show performed on a very public stage, day in and day out, in the place I once called ‘home’. I am glad that I am where I am.