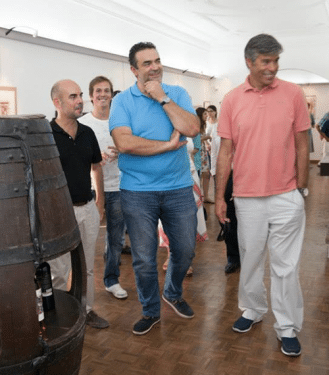 I must ask you to indulge me – being British (although really considering myself to be a dyed in the wool European these days) I admit to being as proud as punch of the 2012 Olympic Games.

It all started seven short years ago when Lord Sebastian Coe spearheaded the challenge to produce the most spectacular games in one of the busiest cities in the world – London.

As the economic crisis deepened and people’s pockets shortened, the cynics and ne’er-do-wells sniggered, thinking that it would have been better had England not won the Olympics. But with true British grit we girded our loins.

We had won the opportunity to stage the games and we would produce the best we possibly could for the world’s most outstanding sportsmen and sportswomen, and for the hundreds of thousands of people who would visit this relatively small island for a once in a lifetime experience.

Without a doubt, a partisan crowd helped many UK would-be medallists to make the most of their moments of stardom. But even when there was no home-grown athlete taking part in an event, the thousands of people in the crowds cheered madly with encouragement – proving the crowd were as sportsmen-like as those participating for the medals.

There were some stunning highlights in London 2012. The first has to be the opening ceremony, which was arguably the best history lesson anyone could wish for. But – well Danny Boyle’s interpretation of the history lesson was all well and good, if you already knew a bit about what you were looking at.

A few simple captions would have been well received – particularly for the non-British viewers. To include Mr Bean (Rowan Atkinson) was pure genius as his wordless humour appealed all nationalities, but to include Sir Paul McCartney was the biggest mistake made since he was included in the Queen’s Diamond Jubilee Concert; there comes a time when you have to say enough is enough Sir Paul.

And on to the games proper. I cannot count the number of times when I said: “There has to be a limit to how much more the human body can achieve.”

There were plenty of records broken at the 2012 games – some were personal bests, others were world records and there were a few Olympic records. But what was obvious to everyone was the commitment and enjoyment by all the athletes taking part in the 36 sports on offer.  Well, that was with the exception of the women’s badminton when eight women badminton players from South Korea, China and Indonesia were thrown out of the Olympics in disgrace for deliberately trying to lose their games.

And of course we cannot forget the volunteers – all 80,000 of them who helped things run smoothly.

The psychology used in many sports was beyond my comprehension and indeed some of the rules. Before the Olympic games started, the only thing I did not readily understand in sport was the off-side rule in football – well add to that the ‘tricks’ to winning a sailing race (achieving a silver medal anyway). Crossing the finishing line first did not necessarily mean that you won gold – however it made for a delightful spectacle.

Love or hate it, the boxing was a feast for the eyes, with Nicola Adams becoming the first woman boxer to win a gold medal. The 29 year-old, who looked 19, was a fine example to sport and is to be congratulated in taking part in what has previously been a sport for men only at the Olympics, whilst retaining her feminism. Her British colleague in the men’s super heavy weight, Anthony Joshua, put the cherry on the icing, beating the previous Olympic champion, Italian Cammarelle on a countback – don’t ask how this works – I have added it to my offside and sailing ‘don’t understand’ list.

In the track and field events, there were some incredible performances. Was I impressed with Usain Bolt – as an entertainer yes, but unless he tripped over his own size 11 running shoes he was unlikely to fail to win his events.

But the excitement was palpable when Bolt along with his fellow Jamaicans took to the track for the 200m final. Yohan Blake could be a strong contender to take over Bolt’s crown in the not too distant future, coming in a very strong second, with Warren Weir third – so Gold, Silver and Bronze to Jamaica – I am sure the party went on long into the night.

But the British golden man was of course Mo Farah. He is chalk to Bolt’s cheese. Slight in stature, reserved in nature and is one of those people you would love to invite to be at your dinner table. His win in the 10,000 metres was extraordinary and the world took him to their hearts, but when he achieved double gold through his well planned and executed 5,000 metres he was the hero of the games.

Everything appeared to run smoothly at the games (even the weather behaved reasonably well), including the security issue which received far too many column inches in the British media before the games started. There were very few disqualifications due to drug taking or other infringements and there were lots and lots of newer names achieving amazing feats over 16 days.

And what of the closing ceremony? A joy to watch – sensational organisation – the use of lighting was stunning and bringing (nearly) all the right people to this party was one that will surely be remembered for decades to come. A mash of British music got everyone dancing in the aisles (literally), as well as thoroughly amazing the audience with a depiction of John Lennon’s face as it was built during the singing of Imagine. Jessie J, The Spice Girls, Take That and other celebrities brought the games to a gold medal finale.

What will I remember? – Eric Idle singing Always Look on the Bright Side of Life – the message transversing all nationalities and one that is a fitting message to us all. Good Luck Rio!