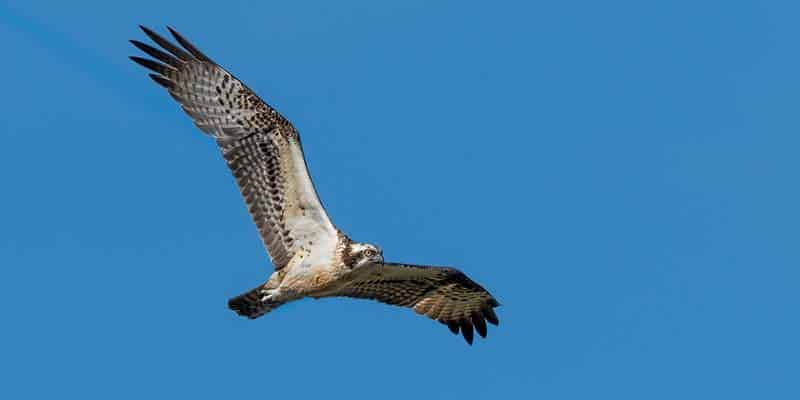 The autumn migration is well underway and as I sit writing this article, a pair of squacco herons fly over to land at a nearby farmers’ barragem (water reservoir) for a break en route to their winter grounds south of the Sahara! However, it’s not these fishermen I decided to write about, but something much bigger!

Although there are sightings during other months of the year, the osprey is considered a migrant visitor in the winter to the Algarve region. There is nothing better than watching this large bird of prey swoop down from a height to pluck a large fish out of the water and it is a sight that is easy to see at many of the coastal lagoons.

The osprey (full name Western Osprey) belongs to a unique species family, the Pandionidae and has the scientific name of Pandion haliaetus. The Portuguese name is águia-pesqueira, which translates to ‘fishing eagle’ and is the perfect description!

This large raptor weighing over 2kg can grow to more than 60cm in length and have a wingspan of 180cm. You may think this makes it easily recognisable, however, in flight, the wings are held in arched shape with the fingers dropped making it easily blend with large gulls and can often be missed.

During a session photographing them at Ludo, many people stopped and asked what was so interesting about the large gulls I was watching. The look of surprise on their faces proved this unintentional camouflage. One lucky couple also witnessed a successful dive for a fish.

Once viewed, it is unmistakable with its dark brown and contrasting underparts, the fingers of the wings are dark brown. The white head with brown superhero mask easily gives them away. Males and females are very similar but can be determined when in a pair as the male is usually much slimmer. The call is a simple “cheep cheep” strong whistle sound.

If you are lucky enough to spot one outside of September to April, count yourself lucky as it is classed as critically endangered as a resident. Even so, during the winter seasons, it is still classed as endangered so it’s great to see these birds successfully winter here in the Algarve.

It has been known for an osprey to prey on small mammals, reptiles and even other birds, however, 99% of its diet is fish and it has specific adaptations to assist this lifestyle. The outer toes are reversible to enable them to grab fish with two toes in front and two behind. The only other bird species able to do this are owls.

The osprey has scales facing backwards on their talons, which helps grasp the slippery surface of fish. Although a catch dive doesn’t involve entering the water, the osprey has closable nostrils and oily dense plumage help with the large splash that is usually made as the fish is plucked from the water.

Watching them hunt is amazing, to see such a large bird effortlessly pluck a large fish from the water and the whole process is very quick. The osprey soars up to 40m above the water using their incredible vision to detect fish under the surface. Once spotted, a short hover is usual before a high-speed plunge, feet first, grasping the unsuspecting fish out of the water where it is carried away to a perch to consume.

Although ospreys can be found in many of the large interior barragens, the best locations are the many south coast wetlands. I have witnessed osprey at Ludo, Quinta do Lago, Salgados and Alvor, with Ludo being the most consistent place to view them.