Portugal Resident
Home Lifestyle Nature The glossy ibis, no longer a rarity in the Algarve 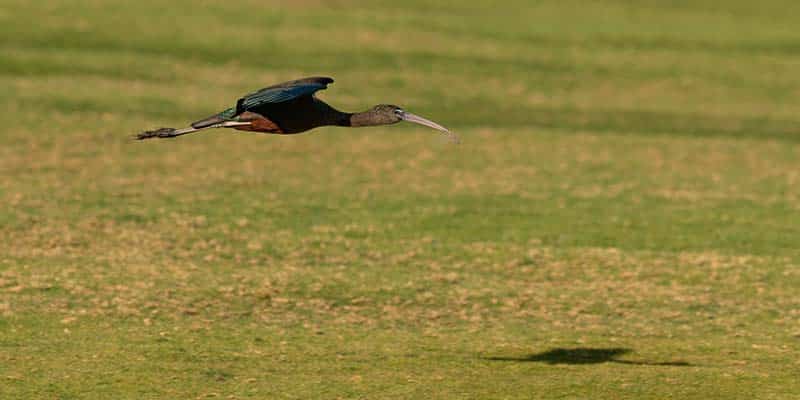 Just 10 years ago, birdwatchers in the Algarve would have glossy ibis on their tick-off lists as a rare sight, however, fast forward to today and it’s easy to find them in large flocks along the lagoons of the south and west coasts. Although classed as a resident bird, they are more commonly seen during the winter months between September and March.

Glossy ibis are the most widespread species of ibis and can be found in any warm climate of Europe, Asia, Africa, Australia and America, and now the Algarve region seems to be a preferred location for these exotic looking birds.

Identification is easy due to their unmistakable long, curved beaks and are called íbis-preta in Portuguese, translating to black ibis. Whilst they certainly look black from a distance and when silhouetted in flight, they are a dark chestnut colour and, if you get up close, you will notice their stunning reflective feathers shining a mixture of shades of green and purple. Juveniles are easily identified by white flecks on their long necks.

The scientific name of Plegadis falcinellus is derived from the Ancient Greek word of plegados and Latin word falcis, which both translate to sickle (a narrow hand-held harvesting tool with a curved blade) describing the beak perfectly. They are a mid-sized bird growing up to almost 70cm in length and can reach almost 1kg in weight with a wingspan of 105cm. Their long, curved beaks grow to just short of 15cm long. Long toes help to wade in shallow water with reeds. In flight, they keep their long necks outstretched and flocks fly in a typical goose-like V formation. They are not a particularly loud bird, making a call that I describe as a croak, which can often be heard when forming flocks in flight.

Their preferred feeding locations are wetlands, particularly rice fields. Here in the Algarve region they choose the coastal wetlands and are rarely spotted inland. Although they spend the daytime feeding at wetlands, they usually leave to roost in trees which can often be many kilometres from the feeding location.

Their diet usually consists of anything they find in the wetland locations such as beetles, crickets, flies, dragonflies and crustaceans such as crayfish.

However, they are not fussy and will also eat amphibians, fish, snakes and even nestling birds!

Nests are built in trees or bushes and between three to five eggs are laid. It takes around three weeks of both males and females incubating the eggs before hatching and often the young leave the nests after just seven days whilst the parents continue to feed them for up to seven weeks.

This time of the year is my favourite time to photograph them, not only because of the ease of finding them but also watching them flocking in large numbers to return to their roosting grounds is something amazing.

Many of the smaller wetlands often completely dry up in the summer, therefore, September through to November makes it easier to spot large flocks as they will concentrate on the larger wetlands that remain dry.

This year, Salgados wetlands, otherwise known as Pêra marsh (between Galé and Armação de Pêra), is a hotspot for them and, during a recent visit, there were constant flocks heading west an hour before sunset through to sunset itself. There are two locations to access Salgados, one is the beach car park in the resort of Salgados and another beach car park at Praia Grande de Pêra, which is my favourite as it’s on the west side of the lagoon so is perfect for afternoon photography.

New legal challenge: Father-of-three gets himself arrested to challenge Portugal’s State of Calamity