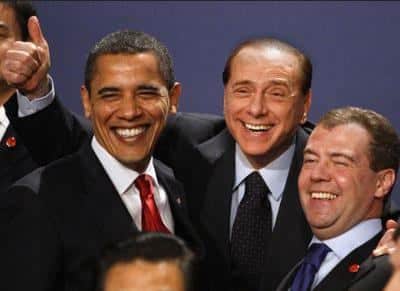 ‘In My View’ is written by freelance journalist and photographer, Chris Graeme, who lives in Lisbon and enjoys subjects such as world economics and politics.

There was considerable backslapping in London last Thursday as G20 world leaders heralded the summit as the ‘day the world fought back against the recession’.

In fact, what they really did, and reluctantly so, was to reach a very expensive http://www. trillion agreement on patching up a problem they and their predecessors had largely been responsible for allowing to happen in the first place.

After all, it was successive US administrations from Ronald Regan, Bill Clinton and George Bush senior and junior, which had allowed a system of legislative checks and balances on the financial system, in place since World War II, to be revoked and a naïve belief that the markets could regulate themselves, that led to the worst excesses and irresponsibility that turned the world’s banking system into little more than a high stakes casino.

But if most of the http://www..1 trillion package pledged to the world’s financial system – $500 billion to the International Monetary Fund (half of which had already been paid months ago), http://50 billion worth of Trade Finance (225 billion had also been agreed months ago) and http://50 billion of Special Drawing Rights, a kind of credit coupon fund that can be used by countries as foreign exchange reserves – was already in the kitty, the effect that unity and consensus, albeit a fragile one, had on the markets, public confidence and the media should not be underestimated.

After all, the financial markets and banking system are all about good faith, trust and confidence, and the G20 Summit was a slick and expertly orchestrated public relations exercise aimed at restoring all of these things and getting credit moving again across the globe without which there can be no growth.

While any cynic examining the contents of Mr. Gordon Brown’s media coup in detail will find a lot of devil in the detail, after all he does have a reputation for hyper inflating figures if not exactly cooking the books, as well as announcing initiatives as if they were new ideas when in fact they had been on the table for some time, it does seem that today’s world leaders have learnt a valuable lesson from the past.

I am talking about the often forgotten failed Economic and Monetary Conference of 1933 in London which also involved the leaders of the leading industrial economies. It occurred in the wake of the 1929 Wall Street Crash and aimed, but failed, to avert the Great Depression of the 1930s and ultimately, it can be argued, World War II, which was, in part, a consequence of that failure.

The difference between then and now, and there are many differences since history, like fashion, never quite repeats itself exactly, is that the leaders left the table without reaching consensus or agreement on a concerted action plan to tackle the fall out of that banking crisis which had been brewing, again from irresponsible hire purchase excesses and lending, since the roaring 1920s.

Of course the world was very different in the 1930s, economies and financial systems were less ‘globalised’, technology was simpler, travel more difficult and expensive and there simply weren’t the media spinning photo opportunities and sensational live wall-to-wall coverage from CNN, Sky News and the like.

The London Summit 76 years ago was organised by the League of Nations and involved 66 nations with the American delegation headed by Cordell Hull, Roosevelt’s Secretary of State, who later called it “a great lost opportunity”.

In 1933, Europe looked to Roosevelt in very much the same way as economists, businessmen and media alike today look to Obama as a consensual figure of common sense to lead us out of a world of financial madness and mismanagement.

So while there is no German Weimar basket case in 2009 or an Imperial Japan marching into Manchuria and the South China Seas in search of oil and minerals, there were worst case scenarios from the failure of the G20 Summit in London on Thursday.

Most analysts agree that the old economic order of the United States, Europe and Japan has now been effectively challenged by a new multi-polar order of India, China, Brazil and Russia, the so-called BRICs.

The ultimate success or weakness of the G20 Summit could determine the way that the world is balanced with these new economic powers in future.

In the 1930s, it was the warlike Germany and Japan that gained most from the failure to reach unity and consensus for the world’s economic crisis, leading to State Capitalism or National Socialism which was organized, planned, isolationist, protectionist and ultimately needed an arms race and the invasion of other countries to prevent its implosion.

The London Summit of 1933 failed because its objectives – to fix the exchange rates and raw materials between the various key currencies through the Gold Standard – were not compatible with those of the main world powers, mainly the United States, which had left it in April 1933.

To have gone back to the Gold Standard would have meant wiping the slate clean in terms of Germany’s awful reparations which no-one, except some maverick British politicians, were prepared to do. We know that results of that with hindsight.

Had they done that in 1933, the United States could have stabilised the currency, fought off inflation, unemployment, mass bank failures and bankruptcies, and kick-started the world economy giving Fascist regimes little room for leverage.

Thankfully, the United States and Europe seem to have a multi-lateral way of thinking today, and it is no accident that Russia and the United States used the G20 Summit as an opportunity to discuss arms reduction once again.

This time the various powers seem determined to navigate the crisis together rather than wander around in the mist in circles like the two characters in Samuel Becket’s’ play Waiting for Godot.

Today, thankfully, we not only have governments but the European Central Bank, the Federal Reserve, the Bank of England, the International Monetary Fund and the World Bank to intervene with concrete funds after the encouraging words of the statesmen.

Today, the high tech global world simply cannot turn its back on internationalism and head off into a fog of its own and blame the Americans or the Chinese or Russians.

And while the huge financial figures might not mean anything in themselves, except a rather costly bail out package that future generations of tax payers will have to foot, the smiles, the unity, the re-establishment of those special ties between G20 countries does seem to have done the trick, for now anyhow, in averting each country going away and trying to solve its own problems internally and to the devil with the rest.