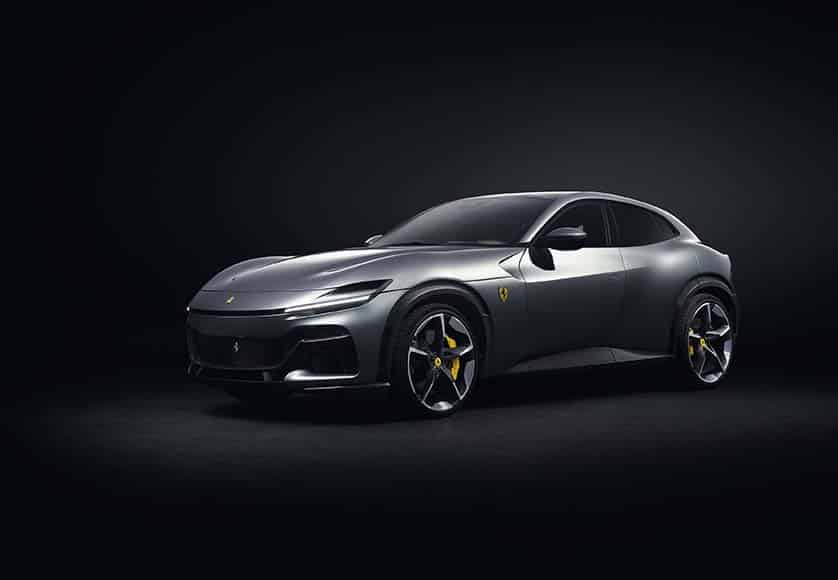 The Ferrari SUV is here. It doesn’t matter anymore if they should or should not build one. What matters is: can it capture the Ferrari spirit?

A Ferrari is the only car in the whole car world that needs no explanation. Allow me to explain. Even if you buy a very good automobile, let’s say a Porsche, you do it for an objective reason. It may be the quality, the performance, the design, the history, the racing heritage, but there is a reason.

You probably heard all your life that Porsche makes the best cars, and it just might be true, really. So, when you buy one, you know exactly why.

Even those brands who position themselves above the Prancing Horse in terms of pricing and exclusivity – like Bugatti, Pagani or Koenigsegg – their clients need to explain to their friends why they bought such a car. As with Porsche, there is a reason: maybe they wanted the most expensive, maybe the most powerful. Maybe they wanted something no one else has. But it needs to be explained. 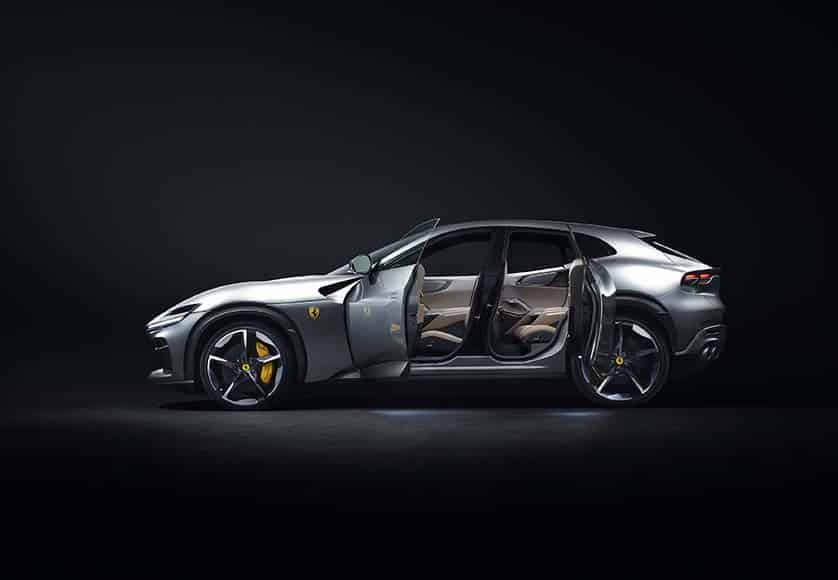 However other constructors may build better, safer, faster or more outrageous cars, they know there is only one Ferrari. It’s not something tangible, nor something quantifiable, it’s just how it came to be. Ferrari is part of our culture, halfway between the car industry and the art world.

And that too is why the announcement that Ferrari would build an SUV sent the purists into a frenzy. Does this money-making machine really need to create such a mundane vehicle? Well, no, not really. But I think Ferrari wanted to see if they could make an SUV that was not really an SUV; I think they wanted to show the world they could build a four-door car that would be as desirable as a two-door, super sports one.

On the day of the launch, which happened at 18:00 Portuguese time, the internet forums were going crazy with the whole ‘Ferrari is selling their soul’ narrative. And then, at about lunchtime, a picture was leaked and suddenly the naysayers went quiet. Could this thing really look this good? 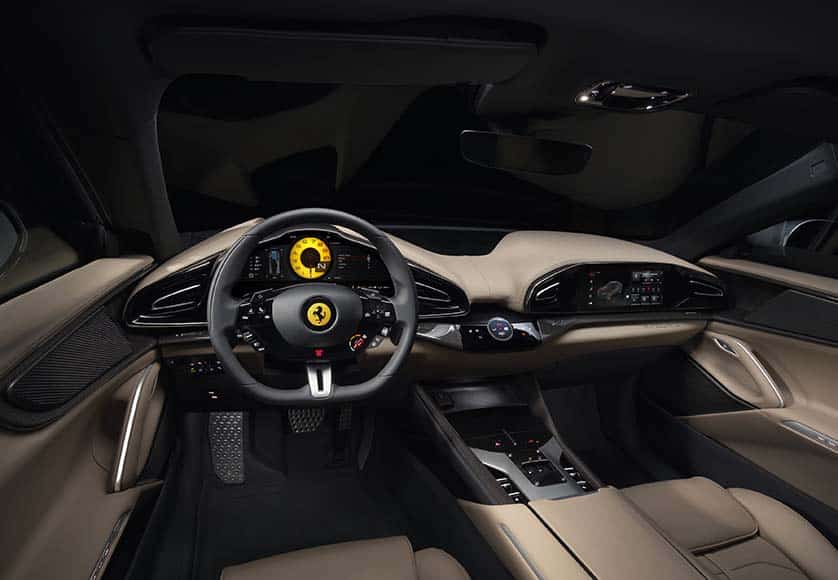 Finally, at 18:00, Ferrari showed the Purosangue for the first time. All the renderings and all the drawings and all the speculation could not have imagined a four-door family car could look this good. But it does. It looks spectacularly good. And you know why? Because it looks like a Ferrari. You look at it and you don’t think ‘oh, it’s that Ferrari SUV’ – you just think it’s a Ferrari like ‘any’ other.

The Purosangue is an evolution of the design language Ferrari created for the FF in 2011 and then for the GTC4 Lusso in 2016 and that is clearly one of the reasons why the proportions seem so right. The Italians, of course, are saying this is not an SUV but a four-door sports car, and it’s hard to argue with them, even knowing that if you have to put the car into a pre-determined segment, it would have to be the SUV.

The Purosangue is much smaller than expected at 4973mm long, 2028mm wide and just 1589mm tall. Ground clearance is 185mm. As for the engine, well, Ferrari being Ferrari, it stuck the greatest one in the world under the hood of the Purosangue. It’s a 6.5 litre V12, based on the unit used in the 812 Superfast, with a 65-degree angle between cylinder banks and high-pressure direct fuel injection. The engineers wanted to give the car more torque at lower revs than usual, as it will be used in more everyday situations, where torque and not power is of more relevance. 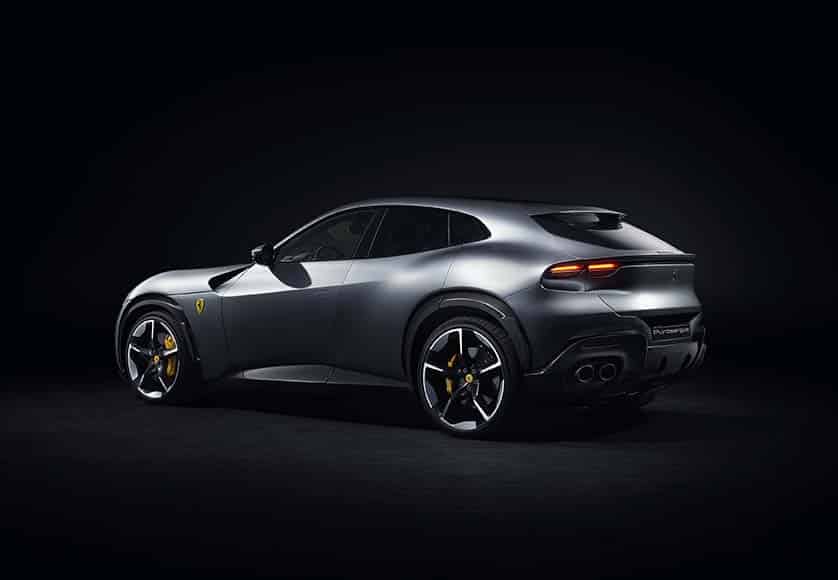 However, push it hard and the Purosangue will deploy all 725 horsepower in typical Ferrari fashion, rewarding the driver with a linear and exciting delivery and a soundtrack that has been the brand’s hallmark for the last seven decades.

The Purosangue is the most powerful SUV on sale, the fastest, the most expensive, the most desirable, the most everything. 100km/h in 3.3 seconds and just over 10 seconds to double that speed. In a two-tonne vehicle! I mean, come on, I know this is not the car Enzo Ferrari had in mind in 1947 when he created the emblem bearing his name, but this is a spectacular machine for 2022.

The sporty lounge interior is easily Ferrari’s finest, with a blend of tradition, heritage, sporting pretension and avant-garde ideas that will cause occupants to pause and take notice every time they enter the car. And then there’s those suicide doors. Simply fabulous. And what better way to assume this is a four-door car than making the doors a standout feature, while keeping a clean, unadorned profile where you only see one door handle. Flavio Manzoni (Ferrari’s design kingpin), I take my hat off to you, sir.

Rumours say the Purosangue was already sold out for the whole production cycle even before anyone had seen the car. I am not surprised. You should not be either. After all, it is a Ferrari. It needs no further explanation. 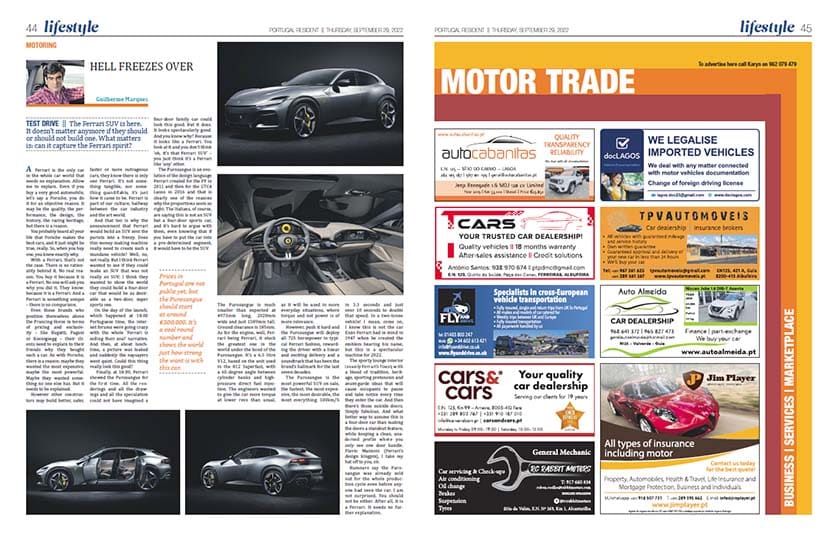