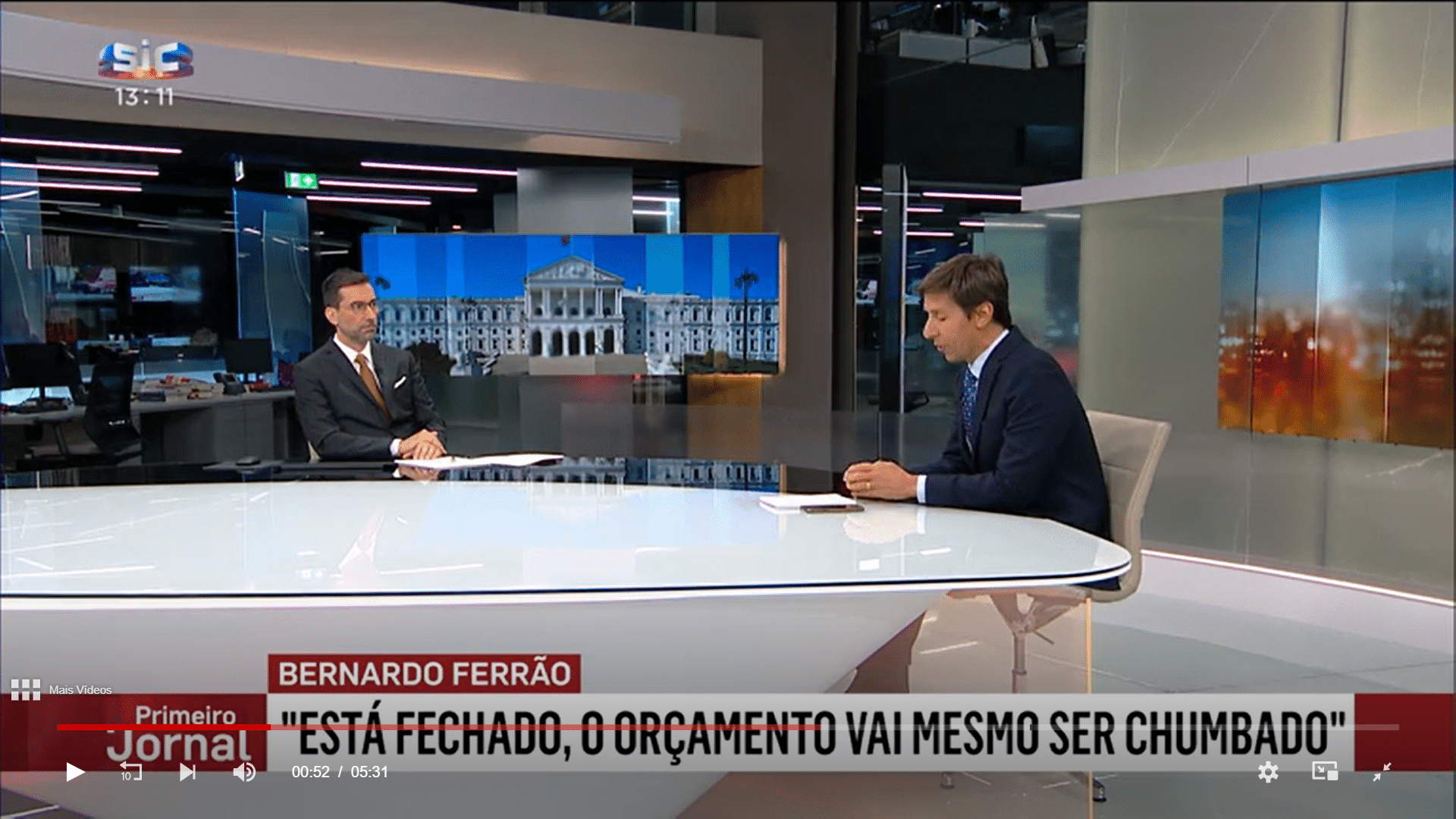 With television stations concentrating today on the debate in parliament ahead of voting on the State Budget tomorrow afternoon, political commentator Bernardo Ferrão has said there is no point wasting time over whether or not it will pass. It is dead in the water, and Portugal’s political leaders are already gearing up for the election campaign.

Talking on SIC televison news at lunchtime, he said “you just need to listen to the tone of the words and you can see the election campaign has already begun”.

In parliament two hours later prime minister António Costa opened the debate detailing all the reasons why, in his mind, the budget goes as far as it can towards both satisfying the demands of former left-wing allies (Bloco de Esquerda and PCP communists) and answering the needs of the country.

And this is perhaps the dilemma. PSD leader Rui Rio has already seized on the admission, suggesting that after years of trying to appease the left wing, it is the Bloco and PCP who are now in the driving seat.

The debate will extend until tomorrow afternoon, at which point, if Bernardo Ferrão is correct, the budget will fail in its first reading, and President Marcelo will move in to dissolve parliament.

Elections will come early in January, and again according to Bernardo Ferrão, Mr Costa actually believes there may be a fighting chance to be voted back – this time with a working majority.

This is the gamble. The PS are gambling on the country listening to everything that has been proposed in the budget, and concluding that it does actually add a little bit to their lives – while the PSD (and other parties) will be banking on getting their messages out, that in the long-term it doesn’t: it will simply lead to the country falling further and further into debt, and lower and lower down in the European ‘food chain’.

How does Bernardo Ferrão see the gamble play out? Not well.

“The landscape is very complicated and we risk having a very difficult year”, he admitted.

This because it is quite feasible that the PS will ‘win’ the elections, but without a working majority. Which parties could it team up with then? Certainly not Bloco de Esquerda or PCP… and it is unlikely to be the centre.-right, as the PM said only recently that if his government had to do that, it would be the end of the government.

While the various chess-moves are being  plotted, PSD – traditionally Portugal’s ‘other main political party’ – is in a leadership ‘struggle’ which current leader Rui Rio really wants nothing to do with right now. His plan is to lead the party into the elections, and only then see internal issues settled (at which point, depending on how he has done, he may keep his place…)

There is so much ‘up in the air’ that Ferrão even entertains the prospect of two elections this year, if the results of the first are inconclusive.

This is not any ‘last ditch attempt’ to get them to change their minds over the State Budget, says Lusa, but more to sound-out their opinions on how things will work in the event that the budget falls tomorrow afternoon.

And just in case anyone believes this is really the ‘huge issue’ it is being made out to be, Bernardo Ferrão told SIC’s news anchor that the winter already has enough really serious problems to be getting on with: the fuel crisis, the social unrest “that we are all seeing in the streets” and the after-effects of the pandemic “which we don’t know are only after-effects” (as new peaks of infection are being reported all over Europe).

All in all, the way ahead is looking “very difficult indeed”, he said.

UPDATE: with the State Budget debate long from over, Miguel Albuquerque, PSD president of Madeira has opened the door to negotiations with a view to ‘saving’ the budget, and helping the government out of this particular moment of deep crisis.

The scenario (still far from settled) would only work if PAN and the two non-inscribed MPs who have all said they are abstaining in the vote tomorrow, changed their positions and voted with the government.

Another potential ‘winning scenario’ could be PAN and the two MPs voting with the government, and PSD Madeira abstaining.